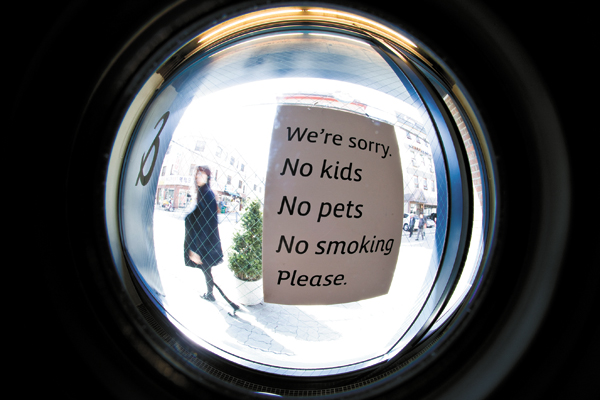 Some restaurants have signs that say “No Kids, No Pets, No Smoking” to provide a more comfortable dining experience for patrons. [JoongAng Ilbo]

The middle of the carriage suddenly became busier as people moved away from the end seats reserved for the disabled, the elderly and children.

“I usually move away from the elderly zone in the train as it makes me feel uncomfortable to stand there,” said college student Kim Won-kyu.

Another university student, Yoon So-ra, says she tries to stay away from these seats on the train as she once got into an uncomfortable argument with an older, drunk rider.

While a gathering of people reading humanities texts, far left, invite guests of all ages to resolve the disconnected communication between different generations, some local clubs only allow people under 30 through the doors.

To assist certain groups of people who are considered to need more protection in society - such as children, the elderly or pregnant women -special zones are sometimes set up in public spaces.

One of the most notable is the aforementioned designated area in subway train cars.

Although the zones were set up with a positive reason in mind, to provide space for those with a real need to sit down, complaints regarding the areas have been increasing recently.

Last year, 219 complaints were reported regarding these designations, almost twice as many as the 117 cases back in 2011.

Young people who have their own reasons for needing to take up these seats feel antagonized when elderly people expect an unconditional concession without considering their reasons for sitting down.

While the public sector has set up many of these types of zones, the private sector has been developing their own.

Many restaurants now have a “No Kids” sign, citing the aim of creating a better dining experience for other patrons as the reasoning behind this, while some nightclubs ban anyone older than 30 from entering.

Thanks to such moves, people can choose to spend time in places with like-minded individuals where they are less likely to receive any hassle.

However, the phenomenon has sparked worries that too many exclusive zones hinder communication among different groups and may boost discrimination, just like what has been seen in the subway cars.

“How you design a space can change how one talks, behaves or communicates within society,” said Chun Young-sun, social studies professor at Kyungpook National University.

To test whether or not rising conflicts could be dissolved from a slight change in the use of space, the JoongAng Sunday, an affiliate of the Korea JoongAng Daily, decided to visit a couple places that are encouraging more conversations between diverse demographics.

The members here have been meeting regularly over the past month and a half to read old texts by Chinese scholar Mencius.

All the participants, whether in their 20s or 60s, put their heads together and analyze the texts.

Young and old people are usually segregated in even the most basic of classes.

However, here in this particular gathering, individuals from different age groups mingle and discuss the texts based on their own analyses. Members of the group think this union is the source of a variety of ideas that can only come from certain age groups.

“It is a very refreshing experience to study with people of different ages,” said the youngest member of the group, Jo Ha-na, 20.

“Since everyone has different expertise and interests, we can get various points of views on the same subject.”

The members of the group said they were able to make the sessions work because no one tries to take the lead but that everyone encourages communication in a cooperative way.

“There are many other programs that have classmates from teenage high schoolers to the retired in their 60s, but many times either the youngest or the oldest lead the group,” said 54-year-old Kim Jong-rak, the leader of the gathering.

“We have a common goal to study the same subject, and we encourage each other to communicate naturally by showing more interest in what others have to say.”

Another way to dissolve conflict is to create a bond of sympathy. Arirang Cine Center, operated by Seoul Seongbuk Cultural Foundation in Seongbuk District, has started to host “Mom’s Day” every Wednesday for mothers with young children.

They learned that this group of people was the one that wanted to indulge in cultural experiences the most, but rarely could because they worried about their children bothering others who visit public places to appreciate the arts.

As a result, the movie theater designated a day for mothers to come to the theater and watch a movie without needing to worry about ruining someone else’s experience.

The theater has set up a space where mothers can change their offspring’s diapers or breast-feed when necessary.

To ensure the film is more suitable for young children, the cinema also leaves the theater lights turned on slightly and turns down the sound.

Moms and their little ones are also free to leave their seats when they want, too.

Some mothers were walking around the aisle to stop their babies from crying when this reporter visited the theater earlier this month. No one complained.

“Such things are unimaginable at a general theater, but here no one shows discomfort even when a child cries or a person tries to go outside,” said 35-year-old Park Su-gyeong, who visited with her 8-month-old daughter.

Although it is dubbed “Mom’s Day,” other moviegoers are also welcome to watch the movies.

It seemed that visitors without children were more willing to put up with any inconveniences because of the special designation.

“It wasn’t so uncomfortable for me to have surroundings that were a bit noisier, as I was already aware that it was Mom’s Day before I decided to watch a movie here,” said 21-year-old college student Lee A-ram after the film finished.

Social studies experts say that each and every member of society needs to cooperate in order to build up a healthy way of communicating with one another without forcing certain people to exist in separate spaces.

“It is necessary to review situations if the segregation that is done for the benefit and protection of the minority starts to bring out side effects, such as discrimination,” said Park Gyeong-tae, social studies professor at Sungkonghoe University.

Another expert argued that society can have open spaces for all and designated zones for people in need at the same time.

“It is not a zero-sum game,” said Kim Ho-gi, a social studies professor at Yonsei University.

“If we can encourage some free communication in a way that doesn’t make the people who are eligible to be part of certain zones feel some sort of deprivation or a sense of alienation, we can have both coexist harmoniously in society.”

Professor Chun said that industry experts need to be more cautious when they design such zones that only target a certain group of people.

“Signs that show an elderly person holding a cane, a pregnant woman or a disabled individual in a wheelchair is one way of communicating violently as these signs could mean that people need to prove how old they are or how hard it is for them to get around,” Chun said.

The professor suggested that instead of having the seats for the elderly in one corner, juxtaposing those with ones for the general public could be a better option, along with a sign that says, “Ask for the seat if necessary.”

“This might be one way to start smoother communication,” Chun added.