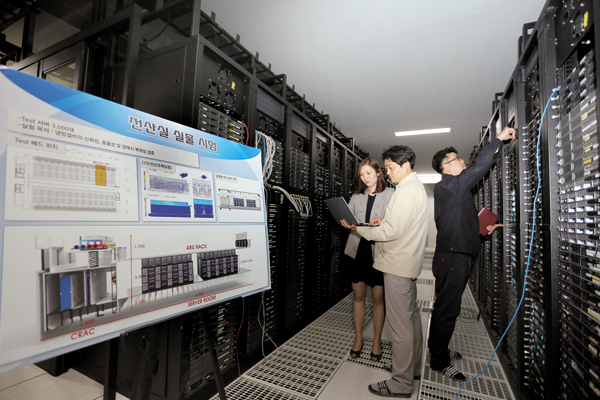 Workers check equipment at LG U+’s Mega Center in Pyeongchon, Gyeonggi, which will be Asia’s largest. Provided by the company

PYEONGCHON, Gyeonggi - To the trained tech eye, it is obvious how a huge dark gray building in Pyeongchon, Gyeonggi, still under construction will be used.

The structure - the size of 12 soccer stadiums - is telecommunications company LG U+’s data center. And it will be Asia’s largest when completed in July.

Data centers house servers, cables and connections to the Internet with supporting equipment for supplying power, cooling and fire protection.

The company said that the 85,547- square-meter (920,820-square-foot) development is aimed at helping local tech companies and multinationals better manage their servers as they face the need for ever-increasing capacity in the age of Big Data and cloud computing.

Now that the cloud infrastructure is becoming an enterprise fixture, the IT industry is looking at how to increase its capacity to handle a vast amount of traffic.

“With the facility, we’d like to position Korea as the hub for increasing data traffic in Asia,” says Choi Young-bum, general manager of the Pyeongchon New Internet Data Center Task Force division.

He also acknowledges that the establishment of the new center is intended to counter the dominance by U.S. tech companies.

“Companies like Google and Amazon have gone for scale when it comes to running data centers,” says Choi. “Although Korea has seen surging traffic, there are not enough data centers to manage the huge number of servers and volume of traffic.”

The telecom’s seven-story facility with three basement levels can provide up to 165 megawatts of power, a performance the company says exceeds that of the vast majority of data centers in Asia.

The company said the Mega Center is the first data center in Korea to use Tier 3 requirements as its guiding principles. The tier system, consisting of four stages, is a standardized methodology used to define data center uptime. With Tier 4 considered the most reliable and robust design, a facility can get a higher classification when it has fully redundant subsystems in cooling, power, network links and storage, and compartmentalized security zones.

The redundancy is essential to run servers and network systems smoothly by hedging the internal systems against unexpected technical glitches and contingencies.

For example, the Mega Center has cooling equipment that is independently dual-powered and redundant substations and generators.

“All electronic components, especially the processors, generate heat when in operation,” he says. “To smoothly operate a data center, the cooling system also should work around the clock concurrently.”

Choi says the center’s cooling system is designed to use energy efficiently.

“We designed a chimney on the side of the server rooms, which is also called a wind path, to discharge heated air externally,” he says during a tour of the basement floors at the center.

“With this wind path, we don’t need to install a great number of energy-guzzling air conditioners, since the structure itself is designed to provide significant cooling.”

The company also adopted built-up air conditioning, which can take up less space and provide a constant amount of wind to maximize circulation of cooled air.

Those systems, the company says, will allow the data center to save energy.

The Pyeongchon Mega Center has a power usage effectiveness (PUE) of 1.4.

PUE is determined by dividing the amount of power entering a data center by the power used to run its computer infrastructure. The lower the number, the higher the efficiency.

“To protect from theft and the accidental or intentional manipulation of hardware, we’ve established five-step security systems,” says Choi.

When asked what companies may use the center, he says, “We’ve already been contacted by global tech companies and gave a tour for them.

“We are not allowed to reveal those names, but already contracts have been made.”
BY PARK EUN-JEE [park.eunjee@joongang.co.kr]