OLED has growing pains, but LG banks on big picture

OLED has growing pains, but LG banks on big picture 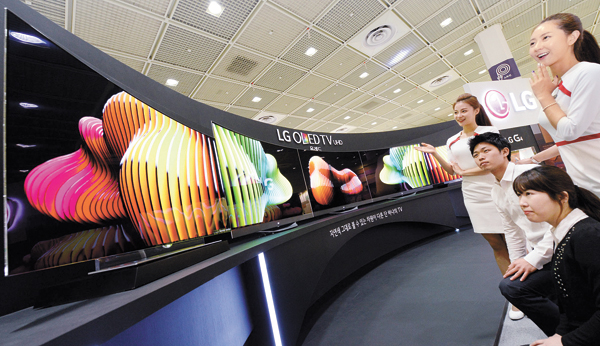 LG Electronics unveiled a 77-inch Ultra OLED TV set at World IT Show at COEX, southern Seoul, on May 27. Provided by the company

The rivalry between LG Electronics and Samsung Electronics, the country’s two largest tech giants, used to be marked by the release of slightly improved versions of the same technology. When it comes to television displays, however, the rivals have gone in different directions.

Until 2013, Samsung also was bullish on OLEDs, but it has stepped back from the next generation panel since 2014, citing lack of demand and manufacturing costs.

Consumer reception of OLED technology, therefore, will potentially decide the fate of the two companies in the TV market for years to come.

This year, LG reiterated that it will increase its production capacity of OLED TVs.

“We see OLEDs as the answer to future demand for next-generation TVs,” said Yeo Sang-deok, president of LG Display, which supplies LG Electronics, during a media event last month.

LG Display established a separate division devoted to OLEDs in January and plans significant investment in the business.

Some say OLED TVs have started to gain traction, but others doubt whether they can hit the mainstream and take off.

The widely held belief is that OLED technology can deliver more accurate color and thinner, flexible displays, compared to conventional panels, such as plasma and LCDs. In addition, OLED is more energy efficient.

Still uncertain is how the market will respond to the premium TVs and whether consumers will be willing to shell out the additional cash for televisions that are often two to three times more expensive than LCD and LED TVs.

The cheapest OLED TV by LG is a 55-inch model that costs 3 million won.

Some analysts are skeptical that customers will pay that much extra for an OLED TV.

“For the masses, OLED TVs would not be an attractive option,” says Roh Geun-chang, chief researcher at HMC Investment Securities. “Conventional LED and LCD televisions have also made progress over the years, so many households are just as likely to be satisfied with an ultra-high definition TV as an OLED.”

Despite the steep price tag, the profit margin for LG Electronics is low because OLED technology has yet to mature. It is a lot tougher and costlier to produce a panel using organic diodes.

DisplaySearch estimates LG Display loses $581.80 on each OLED TV sold, which brought the resulted in a negative 5 percent profit margin on the TVs last year.

On the other hand, profit margins for LCD TVs and ultra-high definition (UHD) TVs reached 40 percent and 17 percent, respectively.

The relatively low yield for OLED television production also keeps it from being commercially viable. Low yield refers to the fact that for an OLED TV to be produced, a relatively high number of panels have to be scrapped as defective.

LG Display says it is working on the problem and has achieved yields of more than 80 percent. That means that for every eight panels that hit the shelves, two are scrapped.

LG also has managed to bring down prices and that is progress.

A year ago, a 55-inch OLED TV was priced about 9 million won. It now costs 3 million won.

Along with improved sales, the quality of LG’s OLED TV’s has been recognized by IT conventions and media. The company won awards at the 2014 and 2015 Consumer Electronics Shows for its OLED TV sets.

LG vowed to further promote the OLEDs this year to help get the technology into the mainstream.

“Still, many people are not familiar with OLED technology,” says Yeo, head of LG Display. “We will make efforts to let people know the benefits that the technology brings while improving the manufacturing capacity this year.”