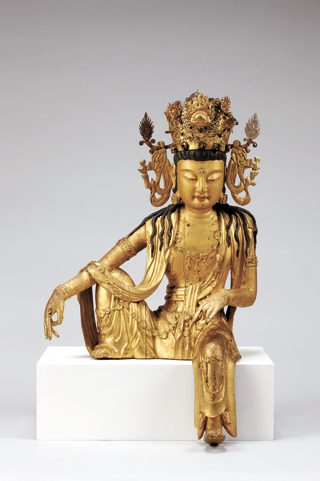 Thirteenth-century wooden seated Avalokiteshvara Bodhisattva containing bokjangmul, or objects inserted into a relic. Provided by the National Museum of Korea

There are some things the ordinary observers of most religions hope their rituals, scriptures and ceremonies will provide. Practitioners often hope for blessings, the protection of property and answers to questions about mortality and the afterlife, among others.

The latest exhibit at the National Museum of Korea in Yongsan, central Seoul, shows that Korea’s Buddhists of old were no different. Focusing on art and relics commissioned by commoners and royalty, the exhibition explores who those believers were, what they wished for and what the religion meant to them.

Marking the Buddha’s 2559th birthday, the exhibit also includes patrons’ stories and their heartfelt, and sometimes desperate, wishes and prayers.

The result is an exhibition that anyone - whether or not they are Buddhist - can relate to.

By supporting major Buddhist projects like constructing a temple or stone pagoda, or enshrining Buddhist statues and paintings in a temple, patrons felt that they were doing good deeds that would earn them blessings and increased prosperity, museum officials say.

Although it is unclear if the patrons themselves reaped any benefits from their largesse, their sculptures, paintings, musical instruments and textiles - many of which are now treasures in addition to being state-designated National Treasures - are nonetheless impressive to contemporary viewers.

The precious materials used to make these pieces and the strikingly detailed techniques and craftsmanship involved have lasted hundreds of years, and the 430 relics and works displayed take viewers as far back as the Unified Silla Period (676-935). 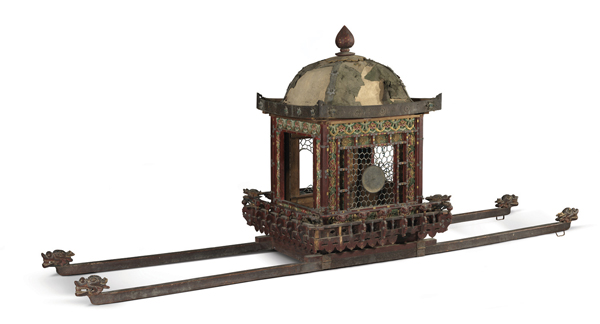 Palanquin for the infant Buddha made in 1670

Director Kim Young-na says the exhibition is more than just a study of religion.

“We looked at which class supported which projects during the different periods, and by doing so we sought to examine our ancient society, going beyond just the study of Buddhism as a religion,” she explained.

During the Goryeo Dynasty (918-1392) when Buddhism was at its heyday in Korea, most of the patrons were aristocrats belonging to the royal court.

It was during this time that Tripitaka Koreana, a collection of 81,258 carved wooden printing blocks recognized by Unesco, was commissioned.

It is possible to study who these patrons were and what kinds of values they had because of the Bulbokjang (Enshrinment of the Buddha’s Relics) ceremony.

During the ceremony, patrons filled the relics they enshrined with things like written prayers, scriptures, textiles and grains. The practice was meant to reflect people’s belief that the relic was more than just an inanimate object made of wood or bronze. 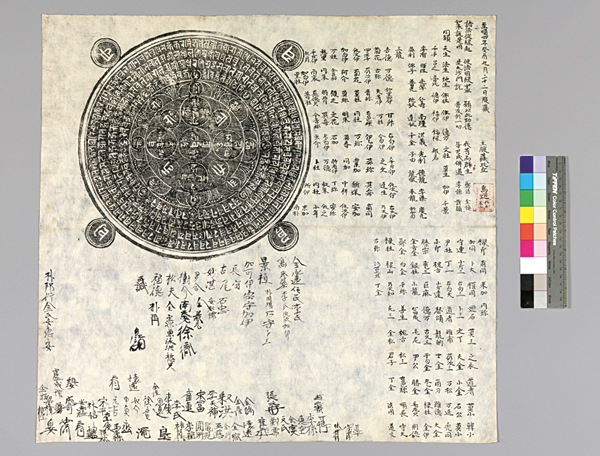 A 14th-century document about patrons of Buddhist art

Today, it gives modern viewers an intimate sense of the interests and desires of the faithful.

The practice became extremely popular in the 13th century, and it was also during this period that donors’ personal information began to be included in the items, according to museum officials.

“Some of the names do not appear to be real names, but rather nicknames,” curator Sin So-yeon said.

Officials also say that the names of believers’ communities are also often included.

The works of art also provide a glimpse into the lives of court ladies during the Joseon Dynasty (1392-1910). During that time, the government repressed Buddhism and instead upheld Confucianism, in part to differentiate itself from the preceding dynasty.

However, there are many Buddhist paintings and relics on display that were commissioned by women of the Joseon court, indicating how many resorted to Buddhism amid in-faction fights and political drama.

The “Devout Patrons of Buddhist Art” runs until Aug. 2 at the Special Exhibition Gallery of the National Museum of Korea. Admission is free. Opening hours are between 9 a.m. and 6 p.m. on weekdays, excluding Wednesdays. Hours are extended until 9 p.m. on Wednesdays and Saturdays to encourage night-time viewing. Hours on Sundays and holidays are between 9 a.m. and 7 p.m. The venue is close to Ichon Station (lines No. 1 and 4), exit 2.