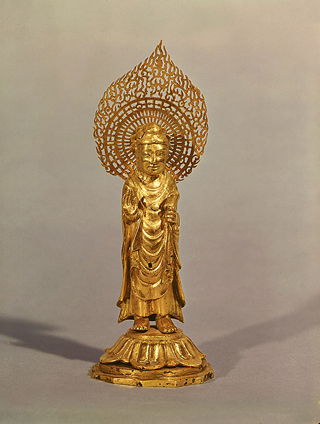 This 14-centimeter (5.5 inch) statuette of a standing Buddha was discovered in a sarira reliquary - a container created to store such Buddhist artifacts - at the Three-story Stone Pagoda at Hwangboksa Temple Site, Gyeongju.

The Buddha has its own gold pedestal with a golden halo of light set behind its head. It is marked by a notably large topknot and an oval face wearing a merciful smile.

It has a shapely nose and eyes that look ahead pensively.

The pedestal, which was made separately before being fitted to the Buddha’s feet, is shaped like an overturned lotus blossom placed on a double-tiered base.

Experts believe - from the physical proportion of the statuette and the shape of the robe folds - that it is a piece from the early Unified Silla Period (676-935).

An inscription discovered in the sarira reliquary where it was stored strongly suggests it was made before 692 when the container was enshrined in the pagoda built that year.