Ministers talk defense, but tensions get in way

Ministers talk defense, but tensions get in way 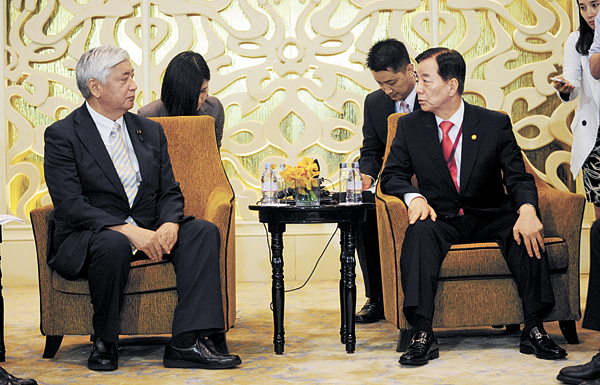 Korean Minister of National Defense Han Min-koo, right, and his Japanese counterpart, Gen Nakatani, discuss military defense issues on the sidelines of the Asia Security Summit on Saturday at the Shangri-La Hotel in Singapore. [NEWSIS]

In the first bilateral talks between Korea’s and Japan’s defense ministers in four years, Tokyo on Saturday vowed not to bring its armed forces to the Korean Peninsula without prior consent from the Korean government, the Ministry of National Defense said.

The talks between Korean Minister Han Min-koo and his Japanese counterpart, Gen Nakatani, were settled on the sidelines of the Shangri-La Dialogue, the annual regional security conference in Singapore also known as the Asia Security Summit.

The last such meeting between the two countries took place in 2011, also on the sidelines of the same conference, as Seoul and Tokyo have locked horns on historical issues over the past few years. Political analysts here predicted Seoul’s change of stance reflects mounting anxiety against threats from Pyongyang.

North Korea announced last month it had successfully launched a ballistic missile from a submarine.

Seoul’s national defense ministry cited Nakatani as saying on the second of the four-day conference that Japan would honor international practices and receive prior consent from any country to which it intends to dispatch its military forces. Korea, Nakatani added, is no exception.

The statement was somewhat of a relief for Seoul, jittered by a recent U.S.-Japan defense cooperation pact signed last month between the two allies during a state visit by Japanese Prime Minister Shinzo Abe to the United States.

The revised bilateral defense cooperation guidelines enable Japan’s Self-Defense Forces to cooperate with Washington “to respond to an armed attack against the United States or a third country,” including Korea.

It was the first time in 18 years that the guidelines had been revised. Japan’s right to collective self-defense, or the right to wage war outside its borders, was forbidden under its postwar pacifist constitution, written by the United States.

The two countries, however, were said to have diverged on military intelligence exchange issues and military assistance, prompting the Korean defense minister to cite historical issues as the key reason why both nations have failed to operate various systems.

Japan must respond to historical issues with wisdom and bravery so that both countries can move on to strengthening ties in the future, Han told Nakatani, who was seven minutes late for the bilateral meeting.

An official from the Korean National Defense Ministry, who asked to remain anonymous, criticized his tardiness as a “diplomatic discourtesy,” adding that the act probably stemmed from his intention to baffle the Korean government or take the overwhelming initiative in the talk.

Abe has been criticized by foreign governments and scholars worldwide for his tendency toward historical revisionism.

His administration has consistently whitewashed the country’s wartime aggressions, thereby wreaking havoc on already tense relations between Seoul and Tokyo.