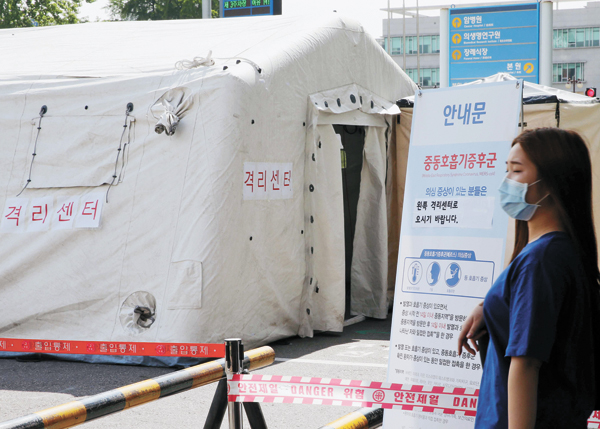 A quarantine tent for testing is set up at Seoul National University Hospital on Sunday for those who suspect they may have been exposed to Middle East respiratory syndrome (MERS). South Korea reported 15 confirmed cases of MERS as of Sunday, 11 days after verifying its first case. By Kim Sang-seon

The government on Sunday declared full-scale countermeasures to further prevent the spread of Middle East respiratory syndrome (MERS), alarmed by the fast spread of the potentially fatal respiratory disease following two more reported cases, and vowed to quarantine those thought to have come in contact with patients.

The decision by the government on Sunday came after the country confirmed five additional MERS infections over the weekend, putting the number of patients in Korea at 15 ? the highest total outside the Middle East.

The government said all 14 patients contracted the virus from patient No. 1, a 68-year-old man, and pledged to do its utmost to prevent infections through a second party, a nightmare for the government.

Under the countermeasures, those 50 and older or those with chronic conditions like diabetes or heart disease who have possibly come in contact with MERS patients will be put under a government-monitored quarantine.

“We judge the next week to be a pivotal time for finding out whether the government has succeeded or failed in preventing the spread of the disease,” Health and Welfare Minister Moon Hyung-pyo said Sunday during a press conference at the Seoul government complex.

The government’s strong stance against the virus follows intense public backlash for its failure to contain the virus in its initial stages, which resulted in 15 confirmed cases in Korea less than two weeks after the first, reported on May 20.

The criticisms center on the fact that eight of the 14 subsequent patients were not subject to a state-ordered quarantine, including a 44-year-old man who left the country for China on a business trip, which raises the prospect that they could have spread the disease before they were diagnosed.

The fact that the first patient went to four different hospitals before he was correctly diagnosed has also added to a sense of public anger over how the government initially handled the outbreak.

The Korean Centers for Disease Control and Prevention (CDC) considers Patient No. 1 to be the source of all the infections in Korea, while all the other confirmed patients spent time in one of the four hospitals at which he was treated.

The first patient contracted MERS sometime during a 16-day business trip to the Middle East that spanned Bahrain, the United Arab Emirates and Saudi Arabia.

In the aftermath, the problem has also spilled over to Chinese authorities. On Tuesday, patient No. 10 departed on a business trip to Guangdong Province, where he tested positive for MERS and is now in treatment under quarantine.

His sister had also been diagnosed with MERS, becoming the country’s No. 4 patient.

In addition, he was allowed to leave the country even after caring for his father, patient No. 3, who contracted MERS after sharing a hospital room with patient No. 1.

In response to growing criticisms, Moon apologized for the government’s “failure to keep track of all the people who had come in to contact [with the first patient … and] to fully grasp the speed of MERS infection.”

Unsubstantiated rumors about the respiratory disease swirled as the number of MERS patients in the country rose.

One rumor claimed that St. Mary’s Hospital in Yeouido, western Seoul, shut down its intensive care unit after treating one of the MERS patients there. The false report also warned people not to go near the facility.

In response, the hospital acknowledged that it had treated a patient in its ICU for blood poisoning and fever before the person had been diagnosed with MERS, though it denied the rumor that it had closed its ICU as a result.

Another rumor stated that the MERS outbreak was, in fact, the result of an anthrax leak from live samples mistakenly shipped to Korea’s Osan military base by the U.S. Army.

Calling the account groundless, the government said it would take legal action against those found responsible, adding that it only heightened anxiety.

Though the virus had not resulted in any deaths as of Sunday, Moon said three patients were in unstable condition with patient No. 6 under the most critical condition.

The anxiety over the MERS spread has also spilled over to the military, which said on Sunday that it had quarantined one soldier whose mother, a nurse at one of the four hospitals at which patient No. 1 was treated, tested positive for the virus.

The military added that he had met with his mother during his leave between May 12 and 14. It further isolated 30 of his fellow soldiers with whom he shares the barracks.

Korea has no previous experience dealing with MERS, which first broke out in Saudi Arabia in 2012 and is most prevalent in the Middle East. The disease has a latent period of up to two weeks and presents flu-like symptoms.

Officials said the virus is not transmitted via air but through direct and close contact.

However, questions still linger over how patient No. 1 was able to infect 14 others, considering the 68- year-old did not share a restroom or hospital room with some of them.

According to the European Center for Disease Prevention and Control, 1,142 people had been diagnosed with the disease as of May 16, and it has so far resulted in 465 deaths - a 40.7 percent fatality rate.

There is no cure for MERS, but experts say such a high fatality rate could be significantly lower in Korea for its advanced medical facilities and knowledge combating it.