Readers get look at news process

Readers get look at news process 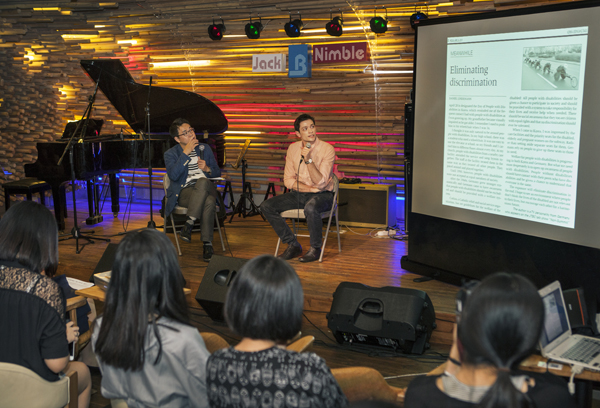 Chung Kang-hyun, left, chief of the social affairs desk for the JoongAng Ilbo, and Daniel Lindemann, a TV personality, discuss one of Lindemann’s columns published in the Korea JoongAng Daily at the newspaper’s first offline meeting with readers Thursday in western Seoul’s Hongdae neighborhood. By Park Sang-moon


To commemorate the 15th anniversary of its publication, the Korea JoongAng Daily held its first offline meeting with readers Thursday evening at Jack B Nimble, a music hall in western Seoul’s Hongdae neighborhood.

One hundred people attended the event: 40 percent of the audience subscribed to the Korea JoongAng Daily, while the remaining 60 percent, members of the public, had responded to the Facebook page for the gathering.

The first half of the meeting featured speakers Moon So-young, Lee Sung-eun and Kim Bong-moon, three Korea JoongAng Daily reporters, who discussed their work for the newspaper and expanded on their life experience.

Daniel Lindemann, a TV personality from Germany who appears on the JTBC talk show “Non-Summit,” talked about his column for the newspaper and answered questions from the audience in the second half of the event.

Officiating was Chung Kang-hyun, the chief of the social affairs desk for the JoongAng Ilbo, who has previously hosted events for the Korean-language daily.

Moon, who heads the Korea JoongAng Daily’s culture desk, kicked off the event by familiarizing the audience with the publication’s news-writing process.

Citing a recent article the newspaper ran on a controversial collection of poems written by an elementary student, Moon expanded on the difference between a newspaper article and a column and explained the factors the editors considered before publishing the article.

“Our chief editor opted not to run the picture included with a particularly violent poem in the article because of how readers might react to it,” she said.

Kim, now in his second year covering political and social affairs for the Korea JoongAng Daily, changed gears, telling the audience they needed to have a bit more fun.

“I know a lot of you are worried about employment, but I think it’s important to have a lot of experiences. People shouldn’t just spend their youth working,” he said.

Like Kim, Lee shared some of her most memorable articles she had written for the Korea JoongAng Daily. In contrast to her colleague’s address, however, she stressed the need for young people to find a profession they loved and do everything they could to achieve their dreams.

Lindemann opened the second half of the meeting by performing two piano pieces he had composed himself. He moved on to discussing several columns he had written that were published in English in the Korea JoongAng Daily.

“Ah, ‘Resistance against tyranny’, I really like this column. I compared the Korean March 1st Independence Movement with Germany’s White Rose,” he said.

In the article, Lindemann noted that both resistance movements “teach us an important lesson. We are not brave because there is nothing to bear. True courage is to overcome the fear no matter how frightening it is.”

That message was repeated later in the event when Lindemann quipped that, “a person is courage,” in response to the various concerns brought forth by audience members, including one by a student who was struggling through flight attendant training and wondered if she was just wasting her time.

“Keep trying really hard, but if it still doesn’t work out, then stop and try something else. It’ll work out,” Lindemann encouraged her.

After the forum ended, Eun Seon-na, 26, shared her thoughts on the event.

“Since I don’t have a job, [Lee Sung-eun’s] words really encouraged me to try harder, and lift a tank of water myself,” she said, laughing as she referenced Lee’s anecdote about refilling her office’s water dispenser in a competition against a male colleague.

“If there is another concert [in the future], I would come again,” added Sunny Park, 25.