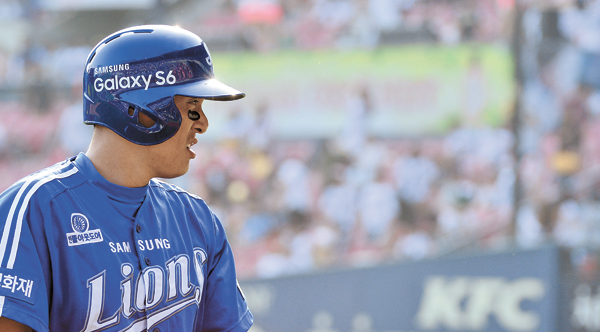 Jamsil Baseball Stadium roared every time Lee Seung-yuop appeared at bat on Sunday. Fans kept expecting to see history made, as the Samsung Lions slugger was just one shy of an unprecedented 400th home run in the Korea Baseball Organization (KBO) league.

But Lee couldn’t finish things off with one more homer, despite going 1-for-3 with three runs and helping his team’s 9-3 victory against the LG Twins.

Fans now expect the historic moment to happen in Pohang, North Gyeongsang, as the Lions meet the Lotte Giants today through Thursday.

There were two occasions that Lee could have notched his 400th homer on Sunday. In his first appearance at bat in the top of second inning, the five-time KBO home run king hit the fourth pitch of Twins starter Henry Sosa, the ball soaring over Twins right fielder Kim Yong-eui. However, it ended in a double after the ball fell just in front of the right fence.

“I didn’t want to think about the home run, but I have less control over my mind than I thought,” Lee said after the game on Sunday. “I couldn’t forget that I had one left because whenever I got into the batter’s box, fans shouted louder than usual.”

Lee’s closest chance happened in the eighth inning, when he hit the fifth pitch of Twins lefty reliever Shin Jae-woong over the right fence. But the ball landed just about a meter outside the foul pole. The eight-time KBO All-Star then was hit by a pitch.

“I noticed from the contact that the ball went skewed,” he said. “But I was sure I’d delivered a good hit.”

Fans now have high expectations for Lee’s performance in Pohang, about 80 kilometers (50 miles) east of Daegu and considered the Lions’ second home.

“I have good memories in Pohang,” Lee said. “I’m going there with positive thoughts and I feel that my batting rhythm is coming back.”

After returning to the KBO from Nippon Professional Baseball in 2012, Lee has been strong in Pohang. He’s even added another nickname, “Man of Pohang,” to his other handles such as the “People’s Hitter” and “Lion King.”

The former Yomiuri Giants and Chiba Lotte Marines player had a batting average of .389, nine home runs and 24 RBIs in his 20 games played in Pohang, with a .833 slugging percentage.

In addition, the Lions’ opponent is the Giants, who have so far surrendered 67 home runs to Lee, the most of any KBO club.

Fans are expected to show up in droves, despite the games being held on a weekday and in a small city, because Lee’s 400th home run ball is a guaranteed “money ball” that will bring a small fortune to whoever catches it.

It’s unclear just how much the ball will fetch because Korea doesn’t have an official market for trading sport souvenirs and collectables, but past cases suggest a hefty sum.

In 2013, 10 years after the record was achieved, Lee’s 300th home run ball was bought for 120 million won ($108,000). Ace Technology Chairman Koo Gwan-young purchased the ball after he heard that the original collector was planning to sell it for $100,000 to a China-based businessman. Koo later donated the ball to the Lions.

Lee’s 56th home run ball in 2003, which represented the Asian home run record for a single season, was caught by two employees from an event planning company. They donated the ball right away to the Lions, for which the club later presented them a 2.1-kilogram (4.6-pound) ball made of solid gold.

The gift was initially valued at about 34 million won, but now it is considered to be worth 100 million won.

The Lions, which plan to display Lee’s 400th home run ball to its museum, said that if a collector donates the ball, it will give them a Samsung Electronics Galaxy S6 smartphone, a tourism ticket to their spring camp and Lee’s bat with an autograph. There is also a chance that the collector could appear as the ceremonial pitcher for a future Lions game.

Since Lee’s 400th home run ball is so valuable, a special marked baseball will be used by the umpires to prevent fans from claiming compensation with a fake. In 2003, when Lee was to mark his 56th home run, umpires reportedly used a ball that had special marks in the KBO logo.

A special marking on the 400th run ball will only be known to the umpires, who will officially confirm it when the collector shows it to them.

In addition, just like the game in Jamsil Baseball Stadium on Sunday, the seats on right outfield at the Pohang Baseball Stadium are likely to be occupied first as it is the area where lefty hitters usually send a home run. Lee has so far sent 177 homers over the right fence.

But unlike in the past, baseball fans will not be seeing butterfly nets in Pohang. The KBO’s “Safe Campaign” now prohibits fans from bringing items longer than 1 meter to (3.3 feet) the stadium.

On Sunday, those who brought nets to Jamsil had to give them up because of the new security rule.

“We kept more than 30 butterfly nets before the game,” an official from the Twins said on Sunday.

“Because of the new safety rule, butterfly nets are not allowed in the stadium, but they will be returned to their owners once the game is over.”