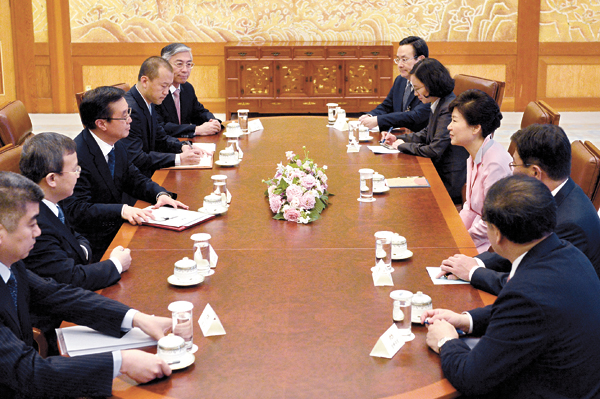 After three years of research and negotiations, the final draft of the free trade agreement between Korea and China was signed on Monday in Seoul, providing tariff-free export opportunities to Korea worth $73 billion as soon as it takes effect.

Trade ministers Yoon Sang-jick of Korea and Gao Hucheng of China signed English, Korean and Chinese versions of the agreement, which must be ratified by each country.

After ratification by both nations, the FTA will go into effect in two months.

The Korean Trade Ministry must submit a motion to ratify to the National Assembly this month. If lawmakers approve, the ratification process will move to the presidential cabinet council.

China has to report the document to the National People’s Congress for ratification.

At the signing, the two ministers promised to press for ratification as soon as possible with the aim of having the agreement implemented by the end of the year.

Under the agreement, any tariff reductions will be implemented by Jan. 1. 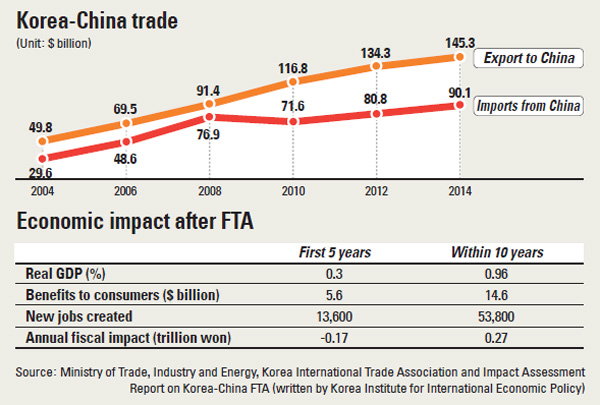 “So far, trade with China has been mostly limited to parts and materials used in manufacturing consumer goods,” said Yoon. “But from now on, the FTA will expand the spectrum of trade, so eventually both countries can build future growth engines on this FTA.”

“This is the most significant FTA in East Asia,” said Gao. “The China-Korea FTA between two large exporting countries will help build a bloc-wide economic partnership in East Asia and the entire Asia-Pacific region.”

Prior to the signing, President Park Geun-hye and Chinese President Xi Jinping exchanged letters through the trade ministers.

“The FTA is significant not only for escalating the two countries’ trade relationship, but also in bringing actual benefits to private sectors and regular consumers in both countries while integrating the economies of East Asia and the entire Asia-Pacific,” Xi wrote.

“The Korea-China FTA is a historical event as a key institutional structure that will strengthen the relationship between two strategic cooperation partners,” wrote Park.

The Korea-China FTA liberalizes 85 percent of the countries’ markets in terms of products and 91 percent of trade volume.

According to the Korea-China FTA Economic Impact Report by several research institutes and Korea’s Trade Ministry, the FTA would allow an immediate tariff-free trade volume of $73 billion for Korea and $41.8 billion for China. 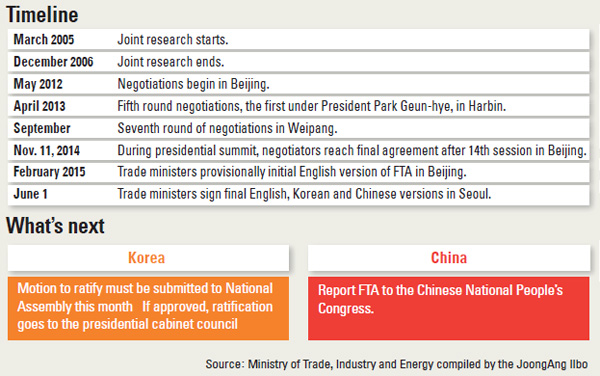 The report also forecast immediate savings up to $5.44 billion a year for Korea, compared to annual savings of $930 million under the U.S. FTA and $1.38 billion under the EU FTA.

Some trade analysts and lawmakers say the impact of the China FTA won’t benefit Korean businesses much because nine of the country’s 10 biggest export products are already tariff free.

Current tariff levels will be maintained for agricultural products like rice, meat, vegetables and fruit. Tariff reductions and schedules vary by product but mostly take effect after 10 to 15 years.

The FTA’s chapter on the service industry remains unfinished but must be wrapped up within two years of implementation of the agreement. At present it would lower entrance barriers for construction, financial, service and environment companies.

“Because the Korean government had to care about potential damage to the local agricultural industry, the overall level of trade liberalization turned out to be shallow,” said Cheong In-kyo, an economics professor and FTA analyst at Inha University.

“So it will be difficult to expect any kind of a large economic impact from the FTA, and it will take at least five years for Korea to actually start seeing some economic benefits.”