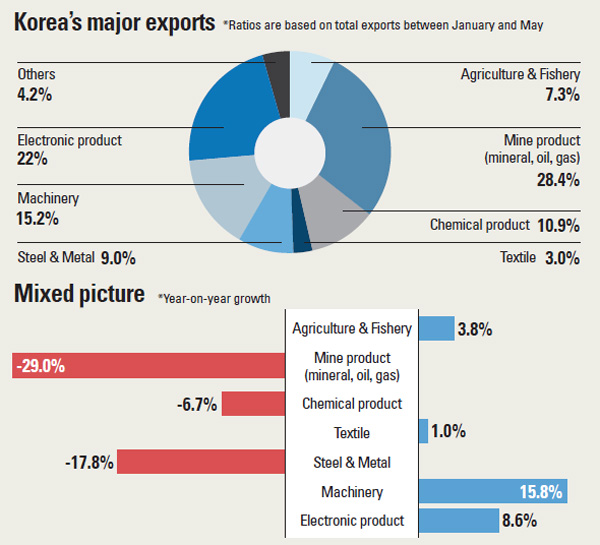 Although the falling price of oil and products derived from it was a major factor, manufacturers also suffered big plunges in exports, including shipbuilding, steel and home appliances.

Exports and imports both fell for the fifth straight month, a monthly report released by Ministry of Trade, Industry and Energy showed. Year-on-year, exports fell 10.9 percent in May, hitting $42.4 billion, while imports plunged further, 15.3 percent, falling to $36.1 billion.

As imports declined at a faster rate than exports, Korea had a trade surplus of $6.3 billion.

It is the first time for Korea to post a double-digit decrease in exports since August 2009, according to statistics by the Korea International Trade Association, when Korea suffered a 20.9 percent plunge.

Last year, Korea also recorded minus growth in exports, but only in four months: January, May, August and November. Since January 2015, however, export growth has gone into the red.

The Trade Ministry said slowed global trade and a drop in raw material prices, including for oil, contributed to the overall plunge in Korean exports. It cited statistics by the World Trade Organization that said imports of 70 countries shrank an average 13 percent in the first quarter.

The biggest plunge in exports among Korean manufacturing was seen in home appliances, which fell 34.7 percent, and shipbuilding, 33.4 percent. Automobile components and steel products also posted double-digit declines, by 13.7 percent and 19.2 percent, respectively.

There were only three items among the top 13 exports items that saw increases: wireless communication devices such as cell phones rose by 26.6 percent; computers climbed by 22.3 percent; and semiconductors grew 4.8 percent.

Because of the weak yen, Korea’s exports to Japan dropped 13.2 percent in May, the fifth straight month of declines.

Following the Trade Ministry report, BNP Paribas, France’s largest bank by assets, said in an analysis that the decrease in exports indicates a falling global demand for Korean products.

“While some of the slide can be attributed to falling prices, contractions in volume measures of activity points to a drop-off in demand for Korean manufactured goods,” the report written by economist Mark Walton said. “Manufacturing’s malaise was further reflected in the May PMI [Purchasing Managers Index], which has also been on a clear downtrend over the past four months.”

Given the gloomy data on the Korean economy, including low inflation, the report forecast the central bank would cut its key interest rate again in June.

“The combination of weakening activity, a problematic exchange rate and serially low inflation provides a compelling case for monetary easing,” it said. “We expect the Bank of Korea to cut 25 percent point at this month’s meeting.”

HSBC also released its Purchasing Managers Index on Monday and cut 1 percent in Korea’s manufacturing sector, from 48.8 in April to 47.8 in May, the lowest reading since September 2013.