Asset firms have a flat Q1

Asset firms have a flat Q1 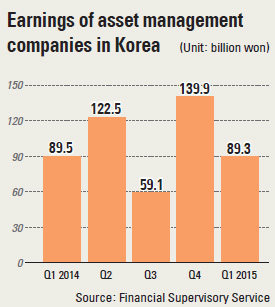 Earnings of asset management companies in Korea fell 0.2 percent in the first quarter of this year compared to a year earlier, a report by the Financial Supervisory Service showed.

The total amount of net profits of the asset management companies in Korea, including foreign firms, was 89.3 billion won ($80 million) in the first quarter, falling 200 million won from the same period in 2014.

Seventeen of the country’s top 20 companies were Korean firms, the report said, and three were foreign.

The report pointed out “a polarization” in earnings among asset management companies, saying 67.1 percent of the total net income was made by the top 10 companies.

Investments in publicly offered funds rose 13.2 percent to 223 trillion won. Given that most of the increase came from the growth of money market funds (27.4 trillion won), the amount in proof of funds dropped by 1.4 trillion won, the report said.

The amount of “discretionary assets,” which refers to assets that investors entrust to asset managers for any kinds of investment, also rose from 300 trillion won to 354 trillion won.

The top financial watchdog said in the report that the growth in private equity funds and discretionary assets came after the central bank lowered interest rates to a historic low. Individual and corporate investors cannot earn much through interest rates on bank deposits.