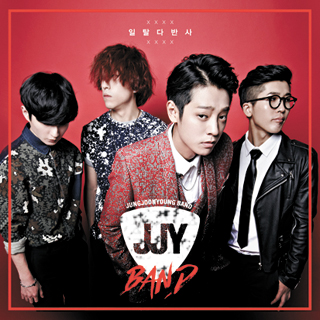 Jung Joon-young, who finished third in the audition program “Superstar K4,” has always emphasized that he has “rock spirit from head to toe,” even though he did look like he was joking most of the time. But all he did after signing with an agency was release a few singles and appear on TV variety shows. What a let down.

But Jung is back with a band and has released his first EP, “Escape to Hangover,” which brings out the deep voice that will remind viewers of when he and Roy Kim reinterpreted late singer Kim Kwang-seok’s “Becoming Dust” with a rock twist during “Superstar K4.” That same vocal style is evident on all eight songs of his new album.

Bon Jovi producer Brian Howes worked on lead track “OMG,” which begins with a guitar riff that instantly catches attention. It gradually builds up, and Jung jumps in with the guitars, drums and bass in full force. Songs that follow like “Lizard,” “Sunset” “Alibi” and “Office” span widely from alternative rock and hard rock to garage rock, making the whole EP a good pick for all rock fans.