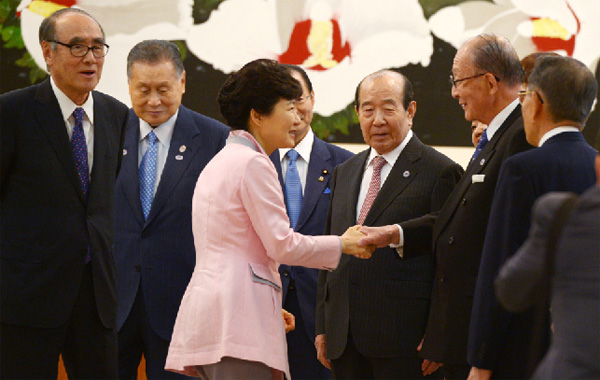 President Park Geun-hye asked a group of veteran statesmen from Korea and Japan, including former Japanese Prime Minister Yoshiro Mori, to cooperate on working towards improving bilateral ties between the countries during a meeting in Seoul on Monday.

The group of senior leaders also met with Japanese Prime Minister Shinzo Abe in March at his residence in Tokyo where they urged for the creation of a political environment conducive to easing bilateral tensions and requested a leaders’ summit be held this year.

Park emphasized to the group at the Blue House that there are “many opportunities this year” to set records straight “as it marks the 50th anniversary of the normalization of ties between Korea and Japan and as Japanese Prime Minister Abe is also expected to make a statement in August to mark the 70th anniversary of the end of World War II.”

The Japanese delegation, fronted by Mori, arrived in Seoul on Sunday to attend the second meeting between the statesmen of both countries. The Korean side was led by former Prime Minister Lee Hong-koo.

Kawamura, who also chairs the Japan-Korea Parliamentarians’ Union, added, “In regard to the issue of the Japanese military’s sex slave, another person passed away, and only 52 remain surviving, and the president also spoke of her desire to work toward recovering their dignity.”

The lack of resolution to the Japanese military’s forceful recruitment of women into sexual slavery during World War II has remained a key impediment in improving bilateral ties between the two countries.

Kawamura elaborated that Park spoke with each person of the Japanese delegation, thanked them for visiting and inquired about Mori’s health. “It was a good atmosphere,” he said.

Park and Abe have yet to hold a one-on-one summit since they each took office.

“There is already much exchange between the new generation,” Mori said at the meeting earlier in the day at Lotte Hotel. “However, I believe that the politicians are remaining stubborn.”

He continued, “We need to recognize that a new era has arrived, and that there is a need, not only for the two countries’ politicians, but for the two leaders to deliberate over this.”

“We are confident that there can be fruitful results if Korea and Japan continue to trust each other and hold conversations with the belief that we are each other’s closest friends,” said former Prime Minister Lee.