How Korea’s crime scene sleuths do their jobs

How Korea’s crime scene sleuths do their jobs 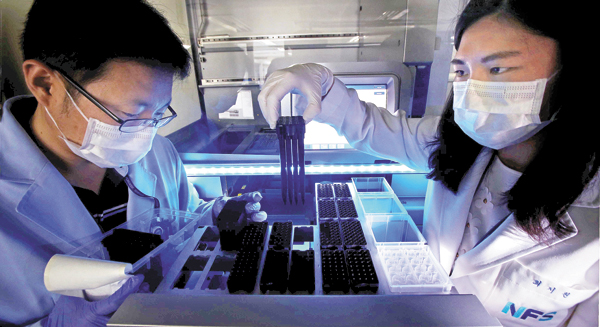 NFS researchers in the Gene Analysis Division look for DNA left by a suspect at the scene of a crime. From left, researchers Kim Ju-yeong and Choe Ji-won put evidence in an automated DNA extraction machine. By Oh Jong-taek

It is like a scene right out of “CSI” or any other television crime show. But the NFS is all too real.

The NFS was established on March 25, 1955, making 2015 its 60th in existence. To better understand the reality of crime scene investigations, the JoongAng Ilbo visited the main NFS office in Wonju, Gangwon, as well as its office in Sinwol-dong, western Seoul.

Back in the autopsy room, the medical examiner begins taking out organs after opening the body, also verbalizing precise descriptions of each organ.

“The corpse being examined today is a 50-year-old male who drowned in the ocean. It’s highly probable that this case is a suicide ...” 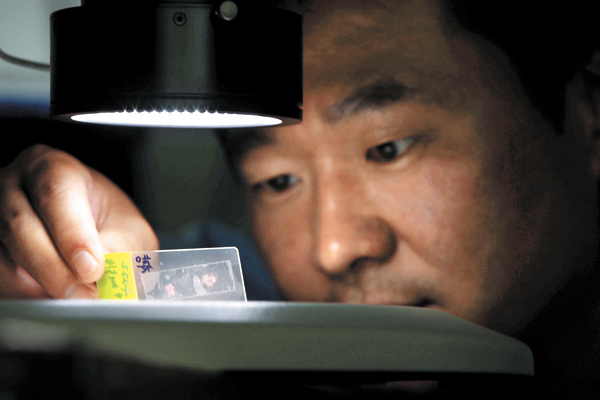 The Drug & Forensic Toxicology Division searches for miniscule pieces of evidence including single threads from a suspect’s clothing. Researcher Yu Seung-jin checks clothing from the victim of an automobile accident. By Oh Jong-taek

The medical examiner continues cutting into the body in order to read the messages left behind inadvertently by the man in the last moments of his life. About 40 minutes have passed as the examiner calls over the investigators.

“Here, a bubble in the esophagus is visible. Sand was also found in a dozen injuries… It looks like he ran into the sea and committed suicide,” explains the medical examiner.

After an autopsy, stitching up a body normally takes about 40 minutes. If the body is severely damaged, it can take up to five hours. There are 38,000 cases annually in which the cause of death is uncertain. About 5,000 of these cases are sent to the NFS.

The Seoul NFS office has the most medical examiners out of all five NFS offices throughout the country. They work just as frantically as the others.

When the JoongAng Ilbo visited the NFS Seoul office on May 18, the bodies of the two officers killed in the May 13 shooting spree at the reserve forces training session in Seocho District, southeastern Seoul, had just arrived. A trainee named Choi killed two trainees and severely injured two others before shooting himself during a three-day reserve forces training.

Autopsies on the victims began at 10 p.m. and continued for hours as examiners pulled bullets from bodies.

When the Sewol ferry capsized and sank in April 2014, more than 300 passengers and crew members died. The NFS created a group to manage the examination of those bodies. The autopsies for the Sewol victims took close to two months.

“In order to increase accuracy, we strictly limit the number of autopsies per examiner to four a day,” said Choe Byeong-ha, a medical examiner. “As a result, we run autopsies 365 days per year, including on holidays and weekends.

“Choi Young-shik, head of the Seoul NFS office and a man with decades of experience, conducted the autopsy of the late singer Shin Hae-chul,” he continued. “Even so, that autopsy still took four hours.” 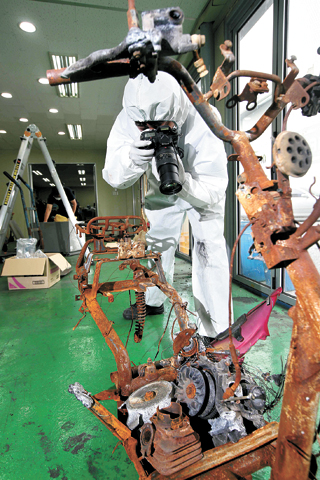 The NFS Science and Engineering Department goes to crime scenes and analyzes evidence. Researcher Choe Chang-ho examines a burnt motorcycle in his lab. By Oh Jong-taek

Singer Shin passed away last October after suffering from cardiac arrest. His autopsy found holes in his small intestines and the sac around his heart related to abdominal surgery Shin had undergone in the past. That surgery was determined to be the cause of his death.

After an initial autopsy, biopsies may be necessary. Organs and blood must be further examined for the presence of drugs, alcohol and toxic substances.

Such analyses are carried out by the Drug & Forensic Toxicology Division. Division head Baek Seung-gyeong takes a pause from reading a report to explain the division’s duties.

“Even though we do the same thing every day, working like machines, it’s always exciting in the end when we solve a case,” he relates.

“Recently we detected pesticides in bodies buried two years ago. Through our investigation we were able to charge a housewife surnamed Noh for the Pocheon, Gyeonggi pesticide serial murders. Noh murdered her ex-husband, husband and mother-in-law using pesticides. We were able to solve the case by digging up the victims’ graves, through which we discovered residue of the pesticide Paraquat.”

In the lab next door, researcher Yu Seung-jin, 39, who was looking into a microscope, suddenly motions for us to come over.

“We discovered a fiber the size of a fingernail on the wheel of a car with the polarizing microscope,” he says. “This fiber comes from evidence we picked up using tape on the wheel of the suspect’s car. The fiber is a perfect match with the victim’s clothes.”

Meanwhile in the Gene Analysis Division, researchers are in the process of collecting DNA from a woman’s underwear, a set of bedsheets, body hair and fingernails. The evidence is from the scene of a sexual assault.

The researchers wear special glasses and use a variable light source machine in order to find any traces of spit or other bodily fluids.

As blue light ran over the underwear, the researchers found white spittle that could have easily been missed. The part of the cloth with the spit is carefully cut out and run through a machine for DNA analysis.

“With sexual assault crimes we are usually looking for any trace of a man amidst hundreds of pieces of female DNA,” says Choe Dong-ho, head of the sexual assault evidence analysis center. “We do this tedious process repeatedly.”

While many NFS workers stare at computer screens or look at DNA analysis machines, pounding sounds can be heard from the first floor annex. Researcher Choe Chang-ho, 33, is running a simulation in order to figure out the cause of an automobile accident. Choe is responsible for determining the causes of fires and automobile accidents, and his research area is reminiscent of a car center, complete with a car and a lift.

The NFS employs 239 researchers who processed 335,000 autopsies and gene analyses in 2013, according to information from the Ministry of Security and Public Administration. In 2010 each researcher conducted 1,298 analyses for the year, and in 2013 that number increased to 1,401. This means that each researcher handled more than three cases a day.

Given their starkly limited budget, NFS researchers often create their own programs to aid their work. A smartphone app that can be used to check if documents have been forged is currently going through the process of being patented.

An identification system developed for large disasters and catastrophes was supplied to a Southeast Asian country for 30 million won ($26,938).

The researchers also have a patent for codec-based recovery of videos from fragmented video data.

Though he may not be as recognizable as Dr. Gil Grissom, supervisor of “CSI,” Seoul NFS office director Choi says, “The NFS competes with its sense of duty and technical skills.”