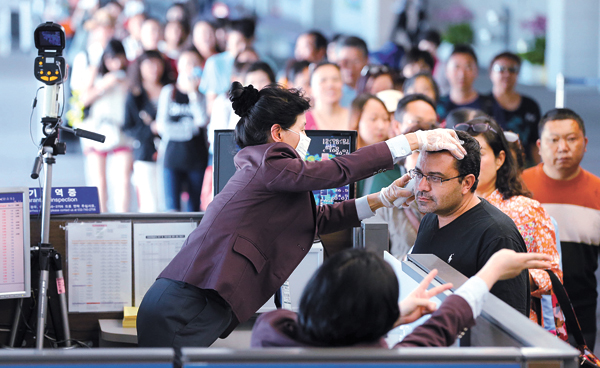 A passenger getting off a plane from Doha, Qatar, is inspected at Incheon International Airport on Monday. The number of Middle East respiratory syndrome patients in Korea reached 18 as of Monday. By Shin In-seop

Three more patients tested positive for a potentially fatal respiratory disease from the Middle East on Monday, raising the total number of patients to 18 - making Korea’s outbreak the fourth largest in the world currently.

And a 58-year old female hospital patient who had contact with the source of the outbreak, a 68-year-old man who traveled to the Middle East and returned to Korea on May 4, died at a hospital in Gyeonggi on Monday after exhibiting symptoms of Middle East respiratory syndrome (MERS). Authorities are still trying to confirm if she had the disease, reported Yonhap News Agency.

No deaths from the disease have previously occurred in Korea.

As of Sunday, Saudi Arabia, which reported the disease for the first time in 2012, had 1,007 cases, followed by the United Arab Emirates with 76 and Jordan with 19, according to the European Center for Disease Prevention and Control.

But all patients in Korea are believed to have contracted the disease from Patient No. 1, who contracted MERS sometime during a 16-day business trip to the Middle East that spanned Bahrain, the United Arab Emirates and Saudi Arabia. He visited four different hospitals before he was correctly diagnosed, where the other patients were infected.

The government has faced acute criticism for its lax quarantine efforts.

“The total number of MERS patients reached 18 with three new patients and they are believed to have contracted the disease from Patient No. 1 at the second hospital he visited,” said an official at the central MERS countermeasure headquarters on Monday. “There haven’t been any reports of tertiary infections so far.”

If the disease starts spreading through other routes, the number of infected could rise quickly.

Patient No. 6 is in a critical condition and is being supported by extracorporeal membrane oxygenation, equipment used for people with heart or lung failure.

“It is important to prevent any deaths,” said Prof. Kim Woo-joo, chairman of the Korean Society of Infectious Diseases. “Patients with serious diseases might die from MERS, but the fatality rate will not go up to 40 percent thanks to the quality medical service in this country.”

MERS has a 40.7 percent fatality rate in the other countries it has affected.

The quarantine headquarters is looking into how the disease was transmitted from Patient No. 1.

“Most of the patients have contracted the disease from the second hospital,” Kim said. “One possibility is that the hospital is a small one that lacks preventive measures compared to larger general hospitals.

“Patient No. 1 may have spread the virus while he coughed or sneezed in the hallway or had contact with other patients.”

The new countermeasure headquarters set up by the Ministry of Health and Welfare is monitoring 715 people. Of them, 33 people were released from isolation after they did not show MERS symptoms for two weeks.

“Those people include potential secondary patients and tertiary patients,” an official of the headquarters said. “As we saw three new patients today, more will be isolated.”

Meanwhile, President Park Geun-hye made her first remarks on the outbreak. “The [health authority’s] measures have been insufficient,” said Park at a meeting with senior advisers at the Blue House.