In the annals of Korean football, he’s led the way on and off the pitch

In the annals of Korean football, he’s led the way on and off the pitch 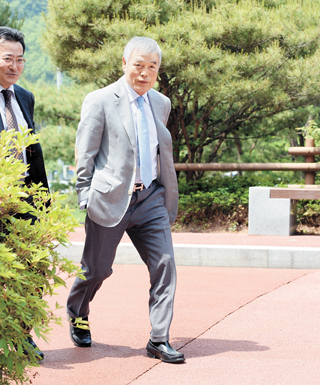 When talking about Korea’s top forwards, football fans often mention Cha Bum-kun, Choi Soon-ho, Hwang Sun-hong and Lee Dong-gook, among others. But one player never gets left out.

While Cha, who ruled the Korean game in the late 1970s and 1980s, is regarded as the best forward ever, preceding him was Lee Hoi-taik, widely seen as the top player in the late 1960s and 1970s for his trademark quickness and powerful shot.

While Lee, who was born in 1946, stands squarely at the center of Korean football history, earning nicknames like “soldier of fortune,” “panther on the pitch” and “man of justice,” his childhood was bleak.

During the Korean War, Lee’s father went to North Korea and never came back, and his mother remarried when he was six. After his mother and stepfather abandoned him, Lee was raised by his grandmother. 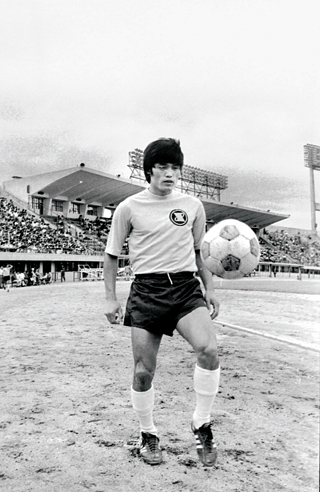 Lee Hoi-taik trains during his time playing for Pohang Iron and Steel Company in 1977. [JoongAng Ilbo]

Lee recalls he enjoyed playing football with friends in Gimpo, Gyeonggi, and he briefly participated in gymnastics in middle school.

“When I was young, it was just after the Korean War and there wasn’t really anything to play,” Lee said in an interview with Korea Football Association (KFA) in 2010. “In Gimpo, none of the schools had a football club. So I just joined adults and young people for games in the village.”

In 1962, he formed a private football club at Gimpo Agriculture High School. To learn the sport more formally, however, Lee decided to attend a high school in Seoul that had a football team in 1963.

His first choice was Hanyang Technical High School, where he failed to make the team after a week’s training. Lee was later admitted to Yeungdeungpo High School and played football there for about five months, which included his impressive debut at the National High School Football Championship where he scored both of his team’s goals in a 2-1 victory over Busan Commercial High School.

The performance was enough to catch the eye of Dongbuk High School coach Park Byung-suk, and Lee joined the country’s top football school in August 1963 as a freshman.

There, Lee stepped up as the top prospect in the nation, along with senior forward Kim Ki-bok, sweeping national football competitions.

By the time Lee graduated, top universities were competing for his talents. He first chose Sungkyunkwan University to rejoin his former Dongbuk High School coach Park, but Lee quit after just two months to play for Yonsei University.

While waiting to join Yonsei the following year, Lee briefly played for the Korea Coal Corporation team and made his national team debut in October 1966 at the Asian Games in Bangkok, where Korea failed to win a medal.

In February 1967, the unthinkable happened. Just a few weeks before he was to be admitted to Yonsei, two men wearing suits approached him during a practice session and escorted him to their black Jeep. It turned out they were with the South Korean Central Intelligence Agency and wanted Lee to play for the agency’s club, Yangzee FC.

Shocked that North Korea reached the quarterfinals of the 1966 FIFA World Cup in England, President Park Chung Hee ordered KCIA chief Kim Hyung-wook to create a football team that would raise the level of the sport in South Korea. Playing for the team was regarded as fulfilling the mandatory military service requirement.

As the de facto Korean national football team, the squad trained overseas, which was unheard of at the time. Lee reached his prime with Yangzee FC, winning various national and international competitions like the Merdeka Tournament, Asia’s oldest football event, in Malaysia. Lee won the top player award in the 1967 Merdeka Tournament and was picked as the Asia All-Star.

Yet the 167-centimeter (5-foot-6) forward remembers it as the time in his career that he most regrets. Yangzee FC players had salaries comparable to those of high-ranking government officials, and the young Lee lost his competitive drive.

“After I achieved my goals of becoming a national team player and the top player in Asia, it made me feel there was nothing left to work for,” he said. “By 1968, my life was half football and half playing with other things. To this day, I regret my behavior during that time because if I would have worked harder, I could have been a better player.”

Still, trophies followed wherever Lee played. In 1969, he won the King’s Cup tournament and the following year the Merdeka Tournament and Asian Games in Bangkok.

After finishing his military duty with Yangzee FC, which was disbanded in 1970, Lee joined Hanyang University four years after his high school graduation.

Lee then won the 1971 and 1974 Park’s Cup and Merdeka Tournament. However, he never played in major tournaments as Korea failed to qualify for the 1968 Summer Olympic Games and the 1970 FIFA World Cup, both in Mexico.

“The 1968 Olympic Asian qualifier against Japan, which we drew, 3-3, remains my biggest disappointment to this day,” he said.

Injuries and waning motivation led Lee to end his national team career in 1974, although he briefly rejoined the squad in 1977 for the 1978 FIFA World Cup Asian qualifiers.

Lee ended his national team career with 21 goals in 75 matches. Many observers, however, believe Lee scored many more than that because not all early national team matches were tracked as they are today.

After playing with the Pohang Iron and Steel Company (now Posco) football team for a while, he hung up his cleats for good in 1979.

Lee’s career continued to shine after his playing days were over.

After coaching Hanyang University, he joined the K-League in 1986 as interim coach of the Pohang Atoms (now Pohang Steelers) and led the team to the championship. He was promoted to coach in 1987 and the Steelers won the K-League championship again the following year.

In 1989, Lee was named to coach the national team, where he worked with other legendary players like Hwang Sun-hong and Hong Myung-bo, while leading the team to the 1990 FIFA World Cup. However, Korea lost all its games against Belgium, Spain and Uruguay in the group qualifier.

Lee recalled the failure in the 1990 FIFA World Cup as the hardest moment in his life, as he said he would never again take national team coaching job, even in his next life.

However, that year was not all disappointments for Lee, who was reunited with his father in North Korea after attending a friendly match in Pyongyang.

In 2005, he was among the first seven inductees into the Korean Football Hall of the Fame.

After quitting all of roles in the KFA, he became the first chairman of the Korea Football Labor Union last year, helping boost welfare benefits and improve the environment for football players.

“I was a beloved footballer to many, so it’s time for me to pass that love to young players,” he said last August at the inaugural ceremony of the union.