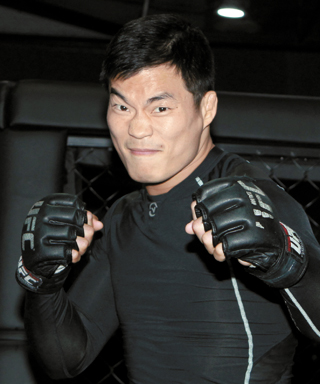 Mixed martial arts (MMA) fighter Nam Yui-chul is well-known for plowing through his opponents like his nickname, the “Korean Bulldozer,” suggests.

But his most recent fight in the Ultimate Fighting Championship (UFC), the sport’s top league, ended in a controversial split decision loss (29-28, 28-29, 28-29) to Philipe Nover at UFC Fight Night 66.

The ruling on the fight, held at the SM Mall of Asia Arena in Pasay, the Philippines, on May 16, angered many UFC fans - including the league’s president, Dana White.

“I knew the judges were gonna ruin that fight!” White wrote on his Twitter account after the bout. “So frustrating, I don’t know how u watch that fight and think Nover won 2 rounds. Yu Chul Nam won that fight.”

Ilgan Sports, an affiliate of the Korea JoongAng Daily, sat down with the 33-year-old four days after his fight, at a gym in Cheongdam-dong, southern Seoul. Looking uninjured, and without a single visible bruise, Nam talked about the fight and his journey from a licensed interior designer to one of Korea’s top brawlers.

Q. How do you feel after your controversial defeat?

A. When I was in the octagon, I really felt betrayed by the result. Maybe this was because I felt really bad for my friends who came all the way from Korea to the Philippines to support me. Fortunately, I received lot of support as fans expressed their anger at the result and wanted to make a bigger deal out of it than I did. I think fans made my fight even bigger than the main event [which is usually the last fight of the night], and I think it’s ultimately up to the fans who wins and loses. After the bout, many fans said, “You won the fight,” which gave me more energy.

Did you really feel confident that you’d won the fight?

I really thought I had. Nover is Filipino-American and since the event was held in Philippines, I obviously expected he’d have the home-field advantage. But I fought better, which should always be enough to nullify any kind of advantage like that. I had more chances to attack, but I didn’t try to because I was confident I was winning. My only mistake was that I didn’t him knock him out quicker.

So you were satisfied with how you fought?

I’d been fighting as a lightweight (70.6 kilograms) for the last 10 years and this fight was first time that I competed as a featherweight (65.8 kilograms). I saw my potential and possibilities for the future during my training and the match itself.

Were you always physically fit?

When I was a student, I never exercised. Even during my military service, I was a driver. I was never an active person, really average as a young boy. My last fight was probably when I was a freshman in high school. In the past, I was actually more interested in interior design, so I went to Shinheung College to study it. I received an interior designer’s license and was considering a career as an interior engineer.

How did you first get started in MMA?

I first saw MMA in the military and I was shocked. I thought, “Will people die if they fight like that?” But suddenly, I said to myself, “Have you ever lived your life as fierce as those people are living theirs?” As I saw people fighting professionally, putting their lives at stake, I also wanted to be that kind of crazy. So as soon as I finished my military service, I registered at a gym. In 2005, I quit my job at a construction materials factory and fully committed to MMA.

Were your parents opposed to you fighting?

I didn’t tell my parents. When I got bruises or cuts, I went straight to my room so I could hide my face and unwrap the bandages in private. But I also couldn’t ask my parents for support, so every month I worked at a construction site for a couple of days to pay for my gym. To save money, I tried not to eat out, and even if I had to, I chose the cheapest things. When I would go to a lunch spot, I would order bean sprout bibimbap (rice with mixed vegetables) for 990 won ($0.89) and add two fried eggs for an extra 400 won. Back then, my gym mates and I were young and always hungry, but since we couldn’t make money from fighting, everyone was having a difficult time. If we had chance to go to all-you-can-eat meat places, though, we’d eat like fighters. We’d always be getting kicked out of buffet restaurants - the owners would say, “Stop eating and leave.” We’d eat that much.

How much do you make from competitions?

You’re known as a fighter who also studies the sport.

Even if I was a fighter who had a champion’s belt, in order to become coach and help young fighters, I thought I would have to study properly. That is why I entered the department of combative martial arts training at Yongin University in 2007 and studied wrestling. Now I’m at the Korea National Sport University’s Graduate School of Sports and Leisure Studies, where I’m preparing to write a thesis.

Currently, our culture doesn’t accept MMA as a job. Until recently, many people didn’t see MMA as a sport, but rather something ignorant people did. Through my matches, the media or any other way I can contribute, I want to work to change people’s perspective of MMA.

What’s your goal in the UFC?

I’m aiming to become the featherweight champion. As I look back, I always took the detour even if there is straight road ahead. I was late to start college, late to start MMA and late to enter the UFC. But through my life, I’ve proved to myself that everything is possible when you dream and work hard. The latest defeat is also part of my way to the top. If I can make four straight wins, I believe I can have a shot for the featherweight champion title. I will do it step by step.