Consumer price index creeps up 0.5% in May

Consumer price index creeps up 0.5% in May 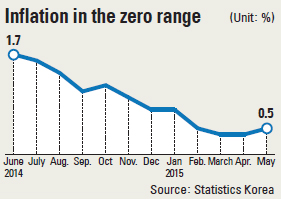 Growth in consumer prices remained negligible in May for the sixth consecutive month, deepening worries that Asia’s fourth-largest economy could be facing a risk of deflation.

Government-run Statistics Korea announced Tuesday the consumer price index for May was 109.82, rising only 0.5 percent year-on-year.

Considering that cigarette prices virtually doubled due to a government-added tax implemented in January, inflation in May was effectively below zero.

Commodities fell 0.8 percent on average, despite prices for agricultural and fishery products increasing 2.8 percent and in the service industry 1.6 percent.

The drop in commodities prices was mainly driven by electricity, water and gas bills, which fell 9 percent on average. Prices for manufactured goods were also down by 0.3 percent year-on-year.

Since consumer prices fell 0.8 percent in December, the moonthly rate of inflation has been between 0 percent and 1 percent.

Inflation was 0.4 percent in March, the lowest level in 16 years.