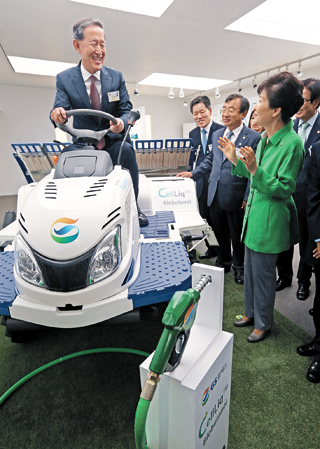 GS will focus on developing the coastal city as a center of biochemicals and food. South Jeolla traditionally has been the nation’s prime region for agriculture and fisheries.

The South Jeolla Creative Innovation Center is the 12th of 17 planned under President Park Geun-hye’s creative economy initiative, the administration’s attempt to encourage growth of regional economies and reenergize the nation’s start-up boom.

“The South Jeolla center will become a mecca where the life sciences industry develops its future, one that encompasses both traditional agricultural and fisheries industries and the cutting-edge biochemical industry,” said Park. “As the Korea-China Free Trade Agreement is expected go into effect soon, I also hope the innovation center plays a central role in helping local farmers and fishermen establish their own start-ups to better market their quality products to the Chinese domestic market.”

GS Group has well-developed retail network in China. GS Group spent 15 billion won ($13.5 million) to build the four-story innovation center. At 2,980 square meters (32,076 square feet), it is the largest center so far and will house a start-up campus and support center for both biochemical and ICT-enabled agriculture technology.

Considering the distance from Seoul, the center also has dormitories for start-up owners, mentors and venture capitalists from other parts of the country.

In addition to the center itself, GS Group established a start-up fund of about 139 billion won for new businesses and training programs.

Through the programs provided at the innovation center, GS Caltex will offer entrepreneurs access to talented employees and its pool of technology to foster strong start-ups in biochemical industry and more eco-friendly technologies that produce chemicals from biomass resources like corn, sugar cane and lumber waste.

The oil company also plans to invest 50 billion won to build a biobutanol factory in the Yeosu Industrial Complex.

The South Jeolla center will operate a short-term food start-up academy that provides professional management, packaging, retailing and export training to farmers from nearby cities, while matching them with representatives from successful companies for one-on-one mentoring.

The center also will connect farmers with nearby food research institutes to encourage the development of health supplements that can be produced using local specialty products.