LG Innotek cashes in on demand for camera parts

LG Innotek cashes in on demand for camera parts 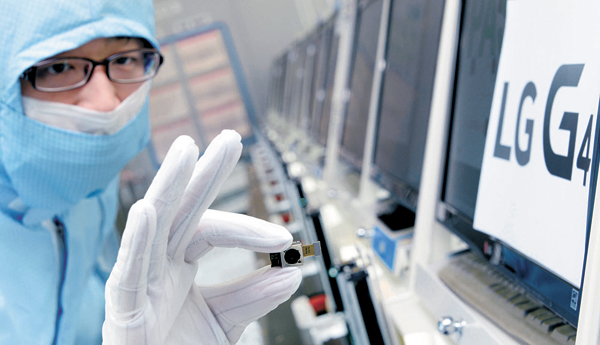 An LG Innotek employee holds up an example of a camera module that is installed on LG Electronics’ latest smartphone, the G4. Provided by the company

LG Innotek, an electronic component manufacturer under LG Group, has achieved the milestone of selling more than 1 billion camera modules, backed by strong demand from smartphone makers including Apple and LG Electronics.

The tech giants have focused on upgrading the camera features on smartphones in order to boost their appeal to users who are fond of taking selfies and snapshots.

The parts supplier said it had sold an accumulative 1.04 billion modules as of the end of May, cementing its status as the world’s largest camera module maker by sales.

The company started producing camera modules in 2005 and had sold 500 million by 2013. It sold an extra 500 million within just two years. 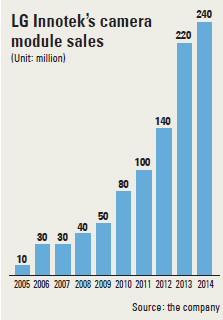 LG Innotek supplies camera modules for LG Electronics’ flagship smartphone G4, whose main feature is its improved camera. It has a lens with a 1.8 aperture, the lowest among existing smartphone cameras.

In principle, a lens with a lower aperture lets more light in, improving the quality of a photo.

It was the first company to mass produce a 13-megapixel module with a stabilization feature.

According to market survey firm Research In China last year, LG Innotek’s sales in the camera module market amounted to $2,304 million in 2013, a 17 percent share in the global market.

The company has been the world’s largest camera module maker since 2011, tapping into the growing demand for high-pixel cameras on smartphones.

The number of pixels that smartphone cameras can be equipped with increased from 8 megapixels in 2009 to 20 megapixels in recent years.