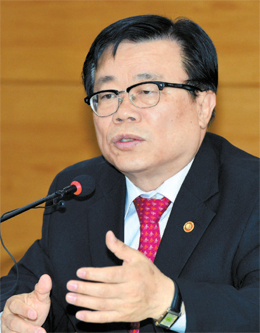 During the 1960s and ’70s, as Korea was experiencing rapid economic growth, hordes of people moved from the provinces to bigger cities like Seoul and Busan.

But that trend has begun to shift again, as more city dwellers settle in rural areas. One of the key reasons for this change has been the growing interest among urbanites to relocate to built up areas better integrated with the natural environment. Many provincial locations also offer better residential amenities and health care.

In 2010, the number of people moving to these areas outpaced the number moving to cities, with people in their 40s and 50s accounting for the vast majority. Afterward, that figure surged - the number of households moving from cities to rural areas increased 11-fold between 2010 and 2014.

The government has encouraged the shift, mainly because relocation can help ease heavy centralization in urban areas. It has also worked harder to promote farming amid the change in demographics.

In line with that goal, the Ministry of Agriculture, Food and Rural Affairs will hold a fair Friday for those potentially interested in relocating.

Ahead of the event, the JoongAng Sunday sat down with Agriculture Minister Lee Dong-phil to discuss the country’s evolving demographics.

Q. Is the number of people relocating to rural areas so significant to call it a trend?

A. We follow the number of people who changed their addresses to provincial residences. Some go to rural areas for farming, while others would like to run a business or enjoy artistic activities. Last year, those households increased by 37.5 percent compared to the previous year, and the figure continues to rise annually.

What’s the main reason behind the increase?

For one, baby boomers are retiring. The number of people born between 1955 and 1963 stands at 6.95 million. Fifty-somethings account for 58 percent of those who relocated to the country. We also take notice of the increase in the number of younger people - those in their 30s and 40s who were born between 1966 and 1974.

The rate of people younger than 40 finding their way to rural areas is growing at an average of 43 percent, which is higher than the average of 37.5 percent. Older people have made up their minds to stay away from hectic city life while younger people are seeking new business opportunities in more remote areas.

At first glance, it’s hard to understand why some 40-somethings, who are earning at their peak, would chose to live in the provinces. What makes them want to move?

Jim Rogers, the chairman of Rogers Holdings, forecast that agriculture was one of the most promising sectors 20 to 30 years to come. As young people look for a niche market that can provide a stable source of income, many have begun looking toward agriculture. But farming isn’t the only thing a person can do in the countryside: They can earn a decent amount of money by launching a business related to agriculture.

For example, I know a man who used his electrical engineering background to develop an electronic mushroom-growing facility. In 2013, when he was 36, he brought just 5 million ($4,500) won to Okcheon, North Gyeongsang, and now he earns more than 30 million won annually through that facility alone. The case of Lee Seok-moo is also interesting. He came to Eumseong, North Chungcheong, in 2010 when he was 32. He set up a facility that allows people to experience what it would be like to work as a farmer, and his business took off. He now earns some 100 million won. In the city, young people can find it really hard to land a decent job. In that regard, rural areas are lands of opportunity.

Is this only happening in Korea?

No, this is the same in many countries. The Japanese government has long promoted living in rural areas as the demographics there rapidly gray.

Since 2012, the Japanese government has given out subsidies for graduates looking for jobs in rural areas. France had the same issue. In the 1970s, it began dealing with an aging population and a labor shortage. The French government also provides subsidies and encourages people to settle in rural regions.

How does the Korean government support relocation?

We established a support center in Suwon, Gyeonggi, specifically for those interested in relocating, but then we moved the site to Yangjae-dong in southern Seoul to reach more people. The Agriculture Ministry also holds a job fair that links people in the city with recruiters in the countryside.

We also have instruction courses on farming supported by 37 institutes and universities. Another service provides loans with low interest rates of 2 percent and increases the maximum credit line up to 300 million won from 200 million won. We also run a center where anyone interested can come and experience farming and living in the countryside for a set period.

Still, the agriculture industry faces a lot of regulations and restrictions.

The Agriculture Ministry has worked on easing regulations in the agriculture sector to boost the industry. We allowed traditional alcohol makers to sell their products online by streamlining complex supply chains. We also invited those planning to take up farming to apply for the government subsidies previously reserved for farmers. For this year, we’re trying to ease regulations in wider areas. We are reviewing municipal governments’ regulations on land use and quality certification. The ministry found 399 cases involving unnecessary regulations. So, we are going to work on revising ordinance.

Even though Korea is considered as technologically advanced, many see the country falling behind other countries when it comes to the development of agricultural technology.

Korea is in the beginning phases of a smart agriculture system. It’s true that we lack core agricultural technology and many farmers are now aware of the importance of technology.

Information and communication technology greatly enhance productivity, so the government will come up with measures to promote the use of technology in farming.