A resolve to win U.S. support for the revolution

A resolve to win U.S. support for the revolution 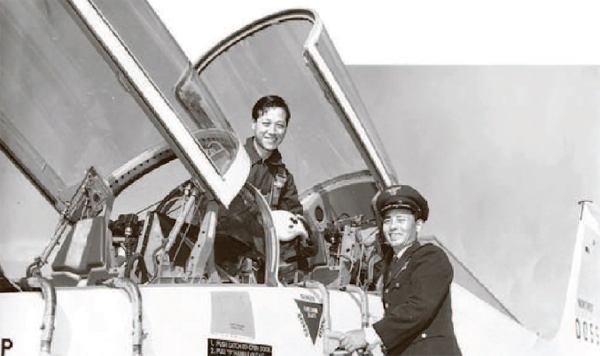 Kim Jong-pil poses for a photo during his 18-day trip to the United States on Nov. 3, 1962, at Vandenberg Air Force Base in California, after a test-run on an F-5A fighter jet that Korea later imported. The jet, Kim recalled, took him up to 60,000 feet in the sky. Provided by Kim Jong-pil

On Oct. 23, 1962, I landed in Washington as the chief of the Korean Central Intelligence Agency at the formal invitation of our U.S. counterpart. It my first time returning to the United States since I had received military training 10 years earlier at the Fort Benning military academy in Georgia.

The mission of my trip this time was to win the trust and support of the current U.S. government for our revolutionary government in Seoul.

Robert F. Kennedy, the attorney general at the time, talks with President Park Chung Hee during his visit to Korea in 1964, one year after his brother, President John F. Kennedy, was assassinated. [JoongAng Photo]

I initially pushed to meet with President John F. Kennedy. But due to heightened tensions in Washington over the Cuban Missile Crisis, which had pushed the U.S. to the brink of war with the Soviet Union, I met with members of his cabinet instead, including Secretary of State Dean Rusk and Attorney General Robert F. Kennedy, the president’s younger brother.

On Oct. 26, I visited the Department of Justice with the Korean ambassador to the United States and headed to Robert’s office. After greeting one another, Ambassador Chung Il-kwon and I sat on a couch in his office. Robert sat in his desk chair, with his feet propped up on the desk drawer. Staring down at me, he asked why I had come here.

I immediately felt judged. He phrased his question as if to imply that I had to come to the U.S. to beg for farm surpluses to take back to Korea, a poverty-stricken country still reeling from a devastating war a decade ago.

Feeling humiliated, I thought to myself, “I came here to see you because your brother told me to. Why would you ask me such an obvious question?”

Suppressing my anger, I replied, “I am not here to beg for food or money. We can feed ourselves. I came all the way to Washington to explain the revolutionary government in Korea. I was going to tell your brother why we moved to set up a government through a revolution. You are mistaken if you think everyone comes here to ask for food or money.”

Robert asked me about my fallback plan in the event that I failed to persuade American officials to support the revolutionary government.

“I will continue to work to persuade officials here on the need for us to have a revolutionary government in Korea,” I said. “I will do it until they understand our objectives in modernizing Korea.”

Robert continued to look at me without saying a word, his feet still on the drawer. To express my frustration at the way he was treating me, I laid down on the couch. Shocked by my actions, Ambassador Chung urged me to sit up straight.

“You can’t do that in here!” he snapped.

“Look at how he is treating us now,” I said. “We may be from an underdeveloped country, but he shouldn’t treat a guest to his country like this.”

Even though we spoke in Korean, Robert seemed to understand my point and sat up straight at his desk. After he put his feet back on the floor, I rose from the couch. In that moment, all three of us burst into laughter. In retrospect, Robert was sizing me up.

From that moment, we began a serious conversation. Robert’s first question was why we had overthrown the civilian government in a coup.

I told him the answer I had kept in my mind for some time.

“We carried out a revolution in the hope that someday we could develop a Korea modeled on the democratic values enshrined in the U.S. system that respects freedom and human rights. Our ultimate goal is to make a country that does not have to rely on funds and food aid from the United States for its survival. We aim to stop being a burden on your country.”

Robert seemed surprised at my answer and my demands for the U.S. government.

I asked him to cut the number of American staff stationed at the United States Operations Mission in Korea by half, from 1,600 to 800, and then use the money that would be saved to increase the amount of financial assistance.

Washington at the time provided $200 million in aid to Korea, but the Korean government received only a portion of it after paying the mission’s 1,600 staff members.

I also asked him to send farm surpluses to Korea between April and June - when food shortages in Korea were most acute - rather than between October and November.

Robert said he understood my point that the delivery of food aid be made to reflect the needs of the beneficiary.

As our conversation approached its end, Robert took out his book, “The Enemy Within,” and autographed the front page. He also said he would pass on my request to his brother at the White House, which he said had been consumed by an unfolding crisis over a missile launcher to be installed in Cuba.

If things went awry, Robert told me, there could be a third world war. But the U.S. government, he added, was determined to block Soviet freight carrying missile equipment en route to Cuba, even if it meant another conflict.

As the president’s younger brother, Robert Kennedy had an influential role in the Kennedy administration as the chief of the Justice Department, and in 1964, he came to visit Korea and met me again.

During his meeting here, he told me I had given him the impression that I was not a man to be looked down upon. Since then, he and I became close friends.

After my visit to the United States, the perception among American officials that I was somewhat anti-American had changed.

The U.S. authorities had no information about me when I served in the May 16 revolution to put Park Chung Hee into power, and questions surrounded my ideology and intentions.

But when I visited South Vietnam in the middle of the war in October 1971, then-U.S. Ambassador to South Vietnam Samuel Berger, who had held the same post in South Korea, apologized for the doubts he had had about me 10 years earlier.

The former Ambassador to Korea asked me to continue nurturing national strength in Korea as I had done, adding that he admired the fact that Seoul had developed to the point where it now deployed its own military troops to Vietnam to help the U.S. effort. kang.jinkyu@joongang.co.kr