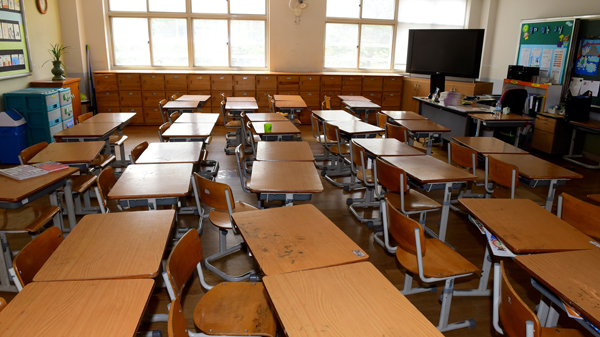 A classroom in an elementary school in Gyeonggi sits empty after the school announced it would cancel classes until Friday in response to an outbreak of Middle East respiratory syndrome (MERS). [NEWSIS]

As news about the outbreak of a potentially fatal respiratory disease has spread over the past two weeks, Korean residents have scrambled to take any preventive measures possible, from canceling school to abandoning hospital visits.

The first death resulting from Middle East respiratory syndrome (MERS) came Monday, when a 58-year-old woman in Gyeonggi who had contact with Korea’s first MERS patient in mid-May, died of acute respiratory failure.

A 71-year-old man also died the same day in Seoul after having had close contact with the first patient.

A total of 34 elementary schools in Gyeonggi said they would temporarily cancel all classes and shut down school this week, as well as eight private kindergartens.

Of the 34 elementary schools, 22 are in Hwaseong, eight in Pyeongtaek and four in Yongin. Seven of the eight private kindergartens are located in Hwaseong, while one is in Suwon.

A school in Paju canceled an outdoor learning program scheduled for Tuesday, while another school in Suwon notified parents that it would hold off on physical checkups planned to be held at a nearby hospital.

“My two-year-old baby has been sick for eight days,” said a 43-year-old salaried worker surnamed Kim. “Because I can’t take her to the hospital, I’m stuck at home checking her temperature 10 times a day.”

Another woman, surnamed Lim, 34, who lives in Gyeonggi, said she also opted to stay away from the hospital for the time being. “I canceled my three-year-old’s appointment with the doctor,” she said. “Booking the surgery wasn’t easy [so I hesitated at first], but as soon as I heard that someone died from MERS, I made my decision.”

At drug stores, pharmacists said protective face masks were all sold out, even the 10 fresh packages that had arrived that morning, filled with 50 masks each.

“People suddenly started rushing in and bought all the masks I had in stock,” said Kim, the 65-year-old owner of a pharmacy in Seoul. “Some people purchased them in boxes, while others went home with dust masks usually used at construction sites.”

Some travel agencies said many of their clients canceled trips to Korea upon hearing the news about the spread of MERS.

“About 300 tourists who were planning to fly in from Beijing this week called off the trip,” said an insider from Hana Tour. “I heard that a myriad of travel agencies in China are abolishing their tour packages to Korea.”

A woman surnamed Hwang, 65, who sells tteokbokki (rice cakes in a sweet red chili sauce) in Mapo District, northwestern Seoul, said she can see the decline in her foreign clientele.

“[The outbreak] is really taking its toll on my business,” she said. “In just two days, the number of foreign customers has more than halved.”

MERS was first discovered in 2012 in Saudi Arabia and has been mostly prevalent in countries in the Middle East. Statistics presented by the European Center for Disease Prevention and Control on Saturday shows that a total of 1,172 people have been diagnosed with the disease so far, with 479 cases resulting in death.

MERS is a viral respiratory illness that causes flu-like symptoms including fever, cough and shortness of breath. The source of the virus remains unknown, but the United States Centers for Disease Control and Prevention (CDC) predict that some people became infected after contact with camels.

The virus is spread primarily from infected people to others through close contact. According to the CDC, infected people have spread it in health care settings, such as hospitals. No vaccines or cures have been developed yet.