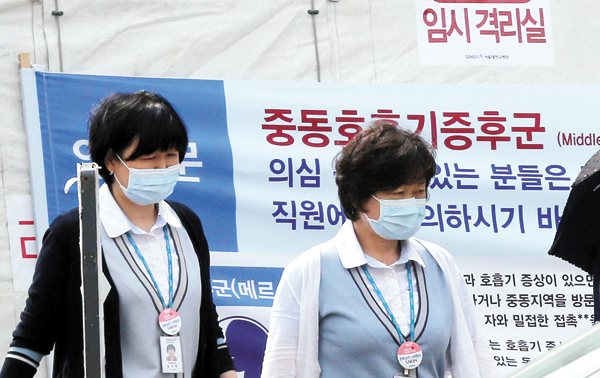 Medical workers at Seoul National University Hospital in Jongno District, central Seoul, wearing masks pass by a temporary isolation tent set up at the hospital on Tuesday. Amid escalating fear of the spread of Middle East respiratory syndrome, the number of patients reached 25 as of Tuesday, along with hundreds of potential patients being quarantined. By Kim Sang-seon

Middle East respiratory syndrome (MERS) claimed its second victim in Korea and a new route of infection led to two more Koreans testing positive for the virus Tuesday, bringing confirmed cases in the outbreak to 25 and raising the local panic level.

The central MERS countermeasure headquarters announced Tuesday morning that a 71-year-old man diagnosed with MERS who had been in critical condition died on Monday. And it confirmed that a 58-year-old woman who died at a hospital in Gyeonggi Monday tested positive for MERS following her death.

But on Tuesday, six more patients were added to the list and two were third-generation cases, meaning they contracted the disease not from Patient No. 1 but from another infected person, Patient No. 16. That raised fears that infections could now spread exponentially from all people who test positive.

The government previously said that would put all its efforts into preventing MERS transmission through second-generation patients.

The two third-generation patients are Patients No. 23 and 24.

The number of MERS cases in Korea reached 25, the third-largest in the world after Saudi Arabia (1,007) and the United Arab Emirates (76).

The 58-year-old woman who died on Monday, Patient No. 25, had been treated for difficulty in breathing due to asthma since May 11 and had contact with Patient No. 1 at a hospital from May 15 to May 17. The countermeasure headquarters said the patient’s underlying conditions such as asthma, high blood pressure and Cushing’s syndrome - caused by prolonged exposure to steroids - might have weakened her in her fight with MERS.

The second fatality, Patient No. 6, who had contact with Patient No. 1 when he stayed in the same hospital ward, tested positive for MERS May 28. The countermeasure headquarters said the 71-year-old man had chronic obstructive pulmonary disease and had one of his kidneys removed because of cancer in 2011.

“The underlying condition of [Patient No. 6] was weak immunity and respiratory disease,” said his doctor, “and it is expected to have negatively affected him after he contracted MERS.”

Patient No. 1 returned to Korea on May 4 and began to exhibit symptoms on May 11. He visited four different hospitals until he was diagnosed with MERS.

The four other new patients were found to have caught the disease from Patient No. 1 at the second hospital.

Third-generation infections are considered a huge threat since it usually means the disease was transmitted due to lax preventive measures and can take place outside of quarantine coverage.

The health authorities, however, said the two third-generation infections were made within a medical facility and played down the threat.

“We will come up with even stronger measures as [I am] going to head the MERS countermeasure headquarters instead of the deputy minister,” said Health and Welfare Minister Moon Hyung-pyo on Tuesday. “However, we are maintaining a crisis level because [third-generation infections] occurred within medical facilities although they are still manageable.”

The ministry admitted there could be more third-generation infections because three other people stayed in the room with Patient No. 16. The health authority tested them for the virus.

The government is also being criticized for concealing important information from the public and fanning panic.

Despite constant requests that the ministry publish the names of hospitals with MERS patients so people can avoid going to them, Moon reaffirmed that the names will not be disclosed. The names of the four hospitals visited by Patient No. 1 have not been disclosed.

“Most of the concerns have absolutely no grounds,” Moon said. “Given that MERS is transmitted through close contact, not going to those hospitals is too much of an overreaction.”

The biggest fear over the spread of MERS is that there is no vaccine or cure. The government is trying to track down potential second- and third-generation patients, which totaled more than 900 in Gyeonggi alone as of Monday, according to the authority.

China, and especially its special administrative region of Hong Kong, is promptly responding after Korea’s Patient No. 10 flew to Hong Kong and subsequently traveled to Guangdong on May 26. He is being treated by Chinese health authorities and was marked as China’s first case of MERS.

A traveller who was in close contact with Patient No. 10 on his air trip out of Korea on May 26 returned to Hong Kong from Seoul Monday, reported the South China Morning Post on Tuesday.

The 32-year-old Korean is one of 29 people who sat within two rows of the patient on the Hong Kong-bound Asiana Airlines flight from Seoul, the media reported. He was intercepted at Hong Kong’s airport on Monday and put under mandatory quarantine at Lady MacLehose Holiday Village in Sai Kung, though he exhibited no symptoms.

After criticism that the Seoul government let him fly back to Hong Kong, the Ministry of Health and Welfare explained that the two countries have different standards. South Korea only restricts people who sat within three seats in any direction of an infected person, while Hong Kong considers all patients within two rows of the patient to be close.