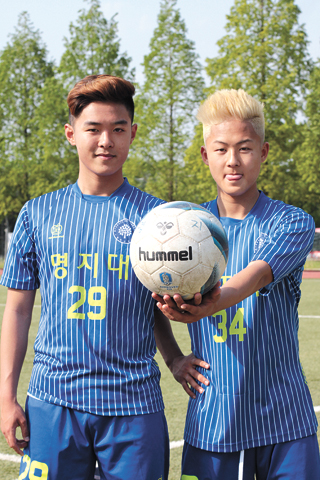 Fans know Lee Seung-woo as a footballer who’s talented and ambitious - and sometimes too cocky for his own good.

But while some worry how the 17-year-old FC Barcelona Juvenile A player’s mentality will affect his future, those who have paid close attention to his early career are less concerned. After all, they know he’s got a strong role model: his older brother, Lee Seung-jun.

In an interview May 14 at the Myongji University campus in Yongin, Gyeonggi, with Ilgan Sports, an affiliate of the Korea JoongAng Daily, Seung-woo said his 20-year-old brother motivates and pushes him to be a better player. It was also Seung-jun who helped Seung-woo start playing football. Seung-jun first joined a team in Pocheon, Gyeonggi, when he was 11, and Seung-woo begged his parents to let him come along.

The two brothers said they played one-on-one often, but it wasn’t easy for Seung-woo to win.

“Seung-woo never went home when he lost,” Seung-jun said. “When we did come back, he’d follow me crying, so there were many days when I just deliberately lost to him.”

But his older brother wasn’t afraid to scold Seung-woo for behaving badly. Seung-jun said he knows his younger brother’s qualities, both good and bad, and so can be a true mentor.

“Till middle school, I really scolded him a lot but that’s because I wanted to him to be better,” said Seung-jun. “When he was tired, I emphasized strength of mind, and I told him stories that empowered him.”

The brothers said that their father was a strict man who emphasized manners and politeness. Both said they were scolded often, though their father has softened nowadays.

“Until elementary school, I raised Seung-jun and Seung-woo with a strong hand, and when they didn’t follow basic etiquette like eating before their elders at dinner, I scolded them,” said Lee Young-jae, father of the Lee brothers. “After Seung-woo went Spain in 2011, I found myself too conservative compared to other parents. So I started giving them freedom.”

“Seung-jun has good football skills, but above that he is bright, polite and has good characteristics,” Kim said. “Seung-woo relies on his older brother, and Seung-jun has been serving good role model for him.”

Although he doesn’t receive the spotlight like his younger brother, Seung-jun is also on his way to becoming a footballer. After graduating from Gwangmyeong Technical High School, Seung-jun received offer from a K-League club, but he opted to head to university. But for now, since his younger brother wants to spend more time with family, Seung-jun has obtained a leave of absence from school and is going to Spain.

“My dream is to play in the Spanish professional football league with my young brother and also hopefully on the national team,” Seung-jun said. “I dream of Seung-woo scoring a goal off my pass in a national team match.”