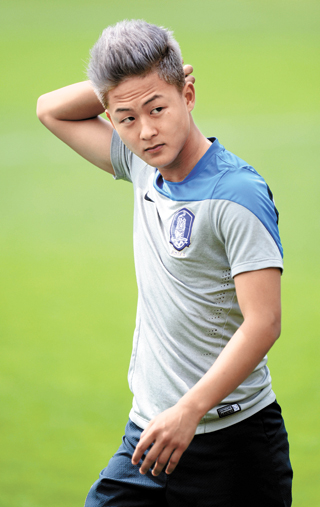 When it comes to praising Lee Seung-woo, the 17-year-old forward playing for FC Barcelona’s U19 squad, football fans haven’t held back.

Labeled everything from the future of Korean football to the “next Lionel Messi,” Lee caught the attention of locals by netting two goals in the quarterfinals of the AFC U-16 Championship last September. Last month, Lee was selected for Korea’s U-18 team and played three matches at the Suwon JS Cup, the biennial international youth football tournament created by Park Ji-sung’s JS Foundation.

But Lee has also been divisive, after a string of bad behavior, like kicking the football at the advertising boards after missing a shot and making angry faces after being substituted.

Some fans have even asked Lee to switch nationalities, since Korea won’t accept players with strong personalities like himself. But in a May 14 interview with Ilgan Sports, an affiliate of the Korea JoongAng Daily, Lee said he’s never considered switching sides.

Lee will have another chance to show his stuff on the U-17 team that will compete in the 2015 Suwon Continental Cup U-17 football tournament held from June 10 to 14.

Korea faces Brazil, the United States and Nigeria, which are all playing in the 2015 FIFA U-17 World Cup in Chile this October. The U-17 team already gathered at the National Football Center in Paju, Gyeonggi, for training before selecting its final squad next week.

A. I behaved badly because I felt so full of regret on the pitch. But I never want to damage my team by getting a yellow or red card.

KBS commentator Lee Young-pyo wrote a column that warned you against learning bad habits in Europe.

[Lee’s] words were said with affection, and I do need to fix things that need to be fixed. But honestly, news articles don’t really impress me. I actually learned more by talking with Hong Myung-bo [former national team coach].

What did Hong tell you?

Although he didn’t have direct relationship with me, he bought me dinner. He said, “Nobody will acknowledge Lee Seung-woo in Barcelona - you have to first approach your teammates.” He also told me about his experiences as a U-20 and national football team coach. I really learned a lot and I will show a different side in the U-17 tournament.

Will you kick the ball at the advertising board again if you find yourself in the same situation?

Well, I don’t know. It’s something that happens without my intention .?.?. I feel it’s a little difficult to change that in a day, but I will try my best not to.

Isn’t it common in Barcelona for players to be aggressive?

They even fight each other. Each player is special and has their own character because they’re so proud to play for Barcelona. But after training, they all get along with each other. There are no problems.

Compare your competitiveness and aggression with your Barcelona teammates. Are in the top 1 percent?

(Laughs). I don’t know about the figures, but I think I’m second to none.

Is it true that you and U-18 team coach An Ik-soo are not getting along during the tournament?

Not at all. There was just a cultural difference because I have played football in Spain. I spent only about 10 days with coach An. He didn’t know my style and I didn’t know his. If we had more time knowing each other we would have performed better.

Some people criticize you by saying you have great technique but lack physical power.

That’s nonsense. I even trained at Barcelona B. The defenders at Barcelona B are also national team members with great physique and talent. I played with them, and they were never able to push me over.

You’ve fallen to the ground after making physical contact with defenders, though.

I fell down after judging the situation. If I can’t make pass to teammates, I try to make the best decision for all of us. It’s not a problem of having a good physique or not.

Some fans have asked you to be a naturalized player for Spain since Korea can’t embrace your attitude. What do you think?

Fans are also divided whether you should be playing for the senior national team.

That’s a problem I can’t speak about it - I’ll just keep working harder. I’m still a prospect and not a perfect player, but I still hope to be selected by the people to grow more. Like Martin Ødegaard of Real Madrid [Norwegian footballer who became the youngest debutant for the senior team at the age of 15 years and 253 days in 2014], I also wanted to be the youngest national team debutant [for Korea].

So you think your skills are not behind others?

That’s right (laughs). I don’t think my skills are inferior, but I still need to work harder. There seems to be little possibility [of me becoming the youngest national team debutant] but I will still have hope.

Critics point out that your skills have deteriorated because you couldn’t play with Barcelona after the club’s violation of international youth transfer rules.

That’s right. The suspension will be over next January, just a few months after playing in the U-17 World Cup in Chile in October. My goal is to find my rhythm in next few months or so and reach Barcelona B by next year. There isn’t much time left, but [not playing enough matches] won’t be a big barrier for my growth.

Of course, I’m looking to win the championship. Although it won’t be easy, we still have to challenge. If there is no challenge, then there is just failure. It’s not an impossible thing to do if teammates come together and aren’t afraid of failing.