Chung may run for FIFA chief to replace Blatter

Chung may run for FIFA chief to replace Blatter 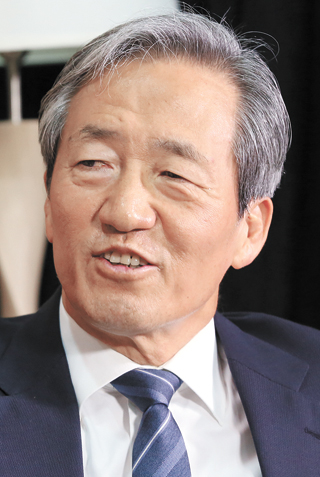 Tycoon Chung Mong-joon, former vice president of FIFA and a current honorary vice president, said on Wednesday he is considering running for FIFA president after Sepp Blatter announced his resignation.

In an exclusive interview with Kim Young-hie, editor-at-large for the JoongAng Ilbo, the 63-year-old didn’t deny that he is interested in running for president of the world’s top football governing body, although he said he will decide after meeting international football officials.

“Before I decide whether I should run for FIFA president, I first want to talk with various FIFA officials in person to get their thoughts,” Chung said. “At the proper time, I will visit Europe to meet officials, including those from other continents.”

Chung, who served as FIFA vice president from 1994 to 2011, said it is the right move for Blatter, 79, to resign after FIFA came under investigation by U.S. and Swiss authorities for widespread corruption.

“I think Blatter had no other choice [but to resign],” he said. “FIFA is a sports governing body and when a shameful scandal happens, those who are involved should leave.”

After announcing he would resign on Tuesday, Blatter said, “Since I shall not be a candidate [for the upcoming election], and am therefore now free from the constraints that elections inevitably impose, I shall be able to focus on driving far-reaching, fundamental reforms that transcend our previous efforts.”

“Considering the current situation of FIFA, his comments didn’t make sense,” Chung said. “It sounds to me that he still wants to maintain his power in FIFA and is looking for a person on his side to be his successor.”

Chung, the largest shareholder of Hyundai Heavy Industries, a former lawmaker for the ruling Saenuri Party and a failed candidate for president of Korea, said the problem with Blatter, who has been working with FIFA since 1975, was that he only took care of people who are behind him and kicked out people who had different opinions.

“He was in FIFA for 40 years and he gathered his closest people to run FIFA and blocked people who asked for reforms,” he said. “It’s about time for those with independent opinions to take over.”

Chung, sixth son of late Hyundai Group founder Chung Ju-yung, said the worst case for FIFA would be Blatter continuing to wield power from behind the scenes even after a new election for president.

“What we learn from this scandal is that FIFA is part of our society and not a separate entity entirely on its own,” he said. “What I can say is that a certain custom in which a president or secretary general is allowed a long term should not be continued. We should think about setting term limits in FIFA.”

When asked about who would be the most promising candidate if he doesn’t run, Chung answered that he simply wants a person who is free from Blatter’s cronyism.

“If FIFA conducts reforms transparently, it will help more countries and provide better services to fans,” he said.

Asked about the controversy over desert nation Qatar hosting the 2022 World Cup, Chung said that since the decision has already been made, people should prepare well for football’s largest event.