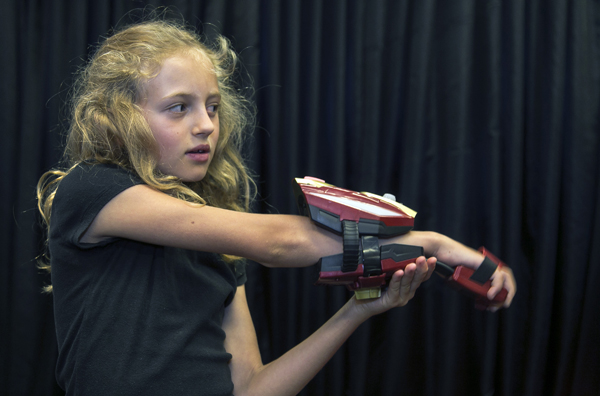 Evangeline Lindes demonstrates a “repulsor” that puts kids in the role of Iron Man at the Disney Consumer Products offices in Glendale, California, on Friday. [AP/NEWSIS]


LOS ANGELES - Disney is launching a line of toys that combines high-tech wearable gadgets and old-school superhero role-playing to keep kids moving while engrossing them in subplots from “The Avengers,” “Star Wars” and “Frozen.”

It’s Disney’s most ambitious game concept meshing real objects and virtual worlds since August 2013, when the family entertainment giant released its Disney Infinity video game that featured figurines and digital characters from “Pirates of the Caribbean,” “Toy Story” and other franchises.

The new line, called “Disney’s Playmation,” hits stores in October with the release of a forearm attachment called a “repulsor” that puts kids in the role of Marvel superhero Iron Man.

The onboard voice of J.A.R.V.I.S. - Iron Man’s computing system - guides children ages 6 and older through 25 missions, where they must use their imaginations to navigate different terrains, then use the repulsor to fire missiles, shoot beams and raise shields. Kids must physically jump or hide to dodge incoming attacks in order to progress and earn points.

Infrared and other sensors inside the armband and base stations help determine whether shots hit the target and if players dodged or hid successfully. If players fail to dodge well, a buzz inside the armband represents getting hit. For now, up to two players can go on missions together or play against each other.

The suggested retail price for the initial package is $120. Another package going on sale in November features Hulk hands - where the action focuses on air-punching and throwing imaginary objects. “Star Wars” themed packages will roll out in 2016, after “Star Wars: Episode 7 - The Force Awakens” debuts in December. “Frozen” packages will go on sale in 2017.

The challenge in creating a new toy concept was to engage kids who expect toys to have an online component, while keeping them active and not just staring at a computer or tablet screen, said Kareem Daniel, senior vice president of strategy and business development for Disney’s consumer products division.

“The way kids are playing is evolving,” he said. “We wanted to make active physical play more exciting.”

Jim Silver, CEO and editor of toy review website TTPM.com, said the product was a “breakthrough” because of the way it integrated technology and classic play patterns. He said there was nothing like it, noting that wearables typically focus just on fitness.

“Kids are aspirational, they want to become the heroes,” he said. “Parents will love that it’s classic play.”

Silver said the price of the initial package, even with add-on figurines for $15, was reasonable given the amount of play and that further missions could be downloaded in the future. “Parents don’t mind spending $100 or $200 if they see it’s going to be played with over and over and it’s the type of play they want.” AP