Beat works to give musicians the upper hand

Beat works to give musicians the upper hand 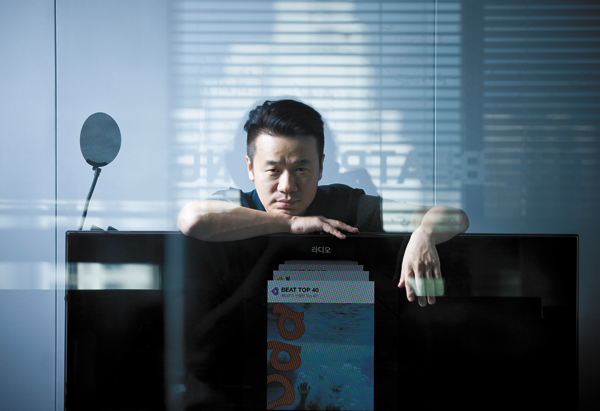 Beatpacking Company CEO Park Su-man sits in his office in Bundang, Gyeonggi. Its free music-streaming service application Beat offers about 3.6 million songs from multiple genres. Unlike other music apps, Beat operates like a radio, he said, and provides up to 60 channels. By Kwon Hyuk-jae

Music-streaming services have long been a contentious issue in Korea. The royalties afforded to local artists and songwriters are less than satisfactory, while consumers - though many agree musicians should be adequately compensated - have shown a reluctance to pay them from their own pockets.

Those who profit in such a system are most often the online music distributors themselves. But now another service has entered the music-streaming environment to compete with online stores like Melon, Mnet, Bugs and Olleh. And unlike its rivals, this one has shown a willingness to satisfy both consumers and copyright holders.

Although a fledgling business launched in March 2014, it has already attracted more than three million registered users in just over a year. One of Beat’s unique features is that it operates like a full-time online music radio service, with about 60 channels that operate around the clock. The channels are similar to playlists which have songs pre-selected according to a specific theme.

Park developed the music-streaming service, Beat. With up to 60 channels, users can select music according to their tastes. Shown at top and above are screen captures of the application.

Like other streaming services, users can also search for particular songs or artists.

But Park Su-man, 45, the CEO of Beatpacking Company who also developed the application, says the charm of the service is that users can “just commit themselves to the music without worrying about money or music selection.”

Relatively well-known in Korea’s IT community, Park took the industry by storm in 2007 when he developed the social networking service me2day.

Shortly after, he joined Naver, the country’s major web portal, and took the lead in developing Band, a mobile-based application service that has proven especially popular among the middle-aged set, many of whom are looking to reconnect with fellow alumni.

Park graduated from Myongji University with bachelor’s and master’s degrees in computer engineering and landed a job in 1995 at the country’s first Kosdaq listed company, Seoul System. For the past 20 years, he has continued to work in the country’s IT industry.

Park said he has enjoyed listening to music since he was a young boy, and as a high school student, he often dreamed of running his own record company. Once he entered college, he even formed a jazz band.

But it never seemed enough. Two years ago, as he neared his mid-40s, Park decided to leave his comfortable position at Naver to launch his own start-up that combined music and IT.

“Among local start-up CEOs, I’m one of the oldest,” he said in a recent interview.

Beat’s rapid popularity most likely lies in the fact that the music is offered for free, though Park added that he fairly pays the artists and songwriters, not from users’ wallets, but from advertising revenue.

To hear more about Beat, the JoongAng Ilbo met with Park last week at his office in Bundang, Gyeonggi. The following are some excerpts from the interview:

Q. It seems like you’re on the frontlines of the music industry.

A. It’s the result of today’s mobile environment. People say Beat is a free service, but actually, from our point of view, it’s not. It’s a legal and appropriate system in which we pay for the music that users listen to through revenue we make from advertisements. The way we consume music has transformed from vinyl LPs to CDs, then to MP3 files and now to streaming. We should continue to find better ways to satisfy both consumers and providers.

That’s right. We first started off as a free radio service. There was a song popular in Korea about how the appearance of video killed the existence of radio [“Video Killed the Radio Star”], but thanks to the development of mobile phones, radio has been revived. We started off with 30 channels and now there are 60 - from the latest K-pop channel to the ’80s and ’90s channels, a channel you can listen to when you want to go to sleep, or a channel on which the DJs are popular artists like Yoon Jong-shin or Akdong Musician. There are also channels where users can re-listen to popular programs on national radio channels like “Bae Cheol-soo’s Radio Camp” and “Lee Hyun-woo’s Music Album.” 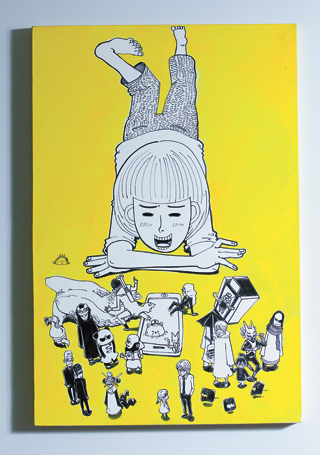 A drawing Park received from one of his fans after developing me2day, one of the first social networking sites in Korea. [JoongAng Ilbo]

But re-listening services for existing radio programs are very common and easily available anywhere else.

You can just re-listen to the radio program you want by going to its website but there’s no music. It skips all the ads and music and you can only listen to the narrations because the radio stations will have to pay additional royalties to the artists and songwriters if they include the songs in their re-listening services. The producers of the radio programs personally visited Beatpacking Company to ask if their programs could be included on our channel. This was something that I had never imagined when I first started the business. I believe this proves that Beat’s awareness has reached a certain level. Of course, the company pays the fees, including the music in those radio channels.

Did the business develop favorably from the start?

No. In fact, I first launched Beat in December 2013. Just like we put songs that we like on blank cassette tapes or CDs for our friends, Beat followed a similar model by giving songs as gifts online. Unlike the current model, it was a paid system. I believed we had a chance at success, but I was wrong. Most of the people either used monthly subscription services to listen to music or downloaded songs illegally. They were hesitant to purchase songs. I heard harsh criticism, like how people thought Beat was a pretty app, but in fact useless. I had a mental breakdown to the point at which I blamed my wife for not stopping me from jumping into this business.

What made you restart the business?

In January 2014, I participated in the 2015 CES in Las Vegas, which is a global consumer electronics and consumer technology trade show. There, I got to experience a free music-streaming service called Pandora. I’d heard about it before but didn’t really pay attention to it. But I got to check out the potential of a streaming service built upon advertising. It was like witnessing heaven from hell. I began to try persuading my investors again, and here I am now.

Users have to wait for an advertisement that’s about 15 to 20 seconds long to be played before they can listen to an hour of one channel on Beat. They may get an audio advertisement after listening to songs for about 30 minutes. They can encounter banner advertisements underneath or above the screen for every other song as well.

If you are a fervent music listener, you won’t need to use our service. But most users tend to be “lazy” listeners. There are about 40 million smartphones in Korea, but currently, the number of smartphones that are registered for monthly subscriptions to the country’s numerous music-streaming services has been tied up at around five million. The people who own the remaining 35 million smartphones became my potential consumers.

There are concerns over music services that operate for free.

The current music market has reached a certain level of limitation. The number of subscribers to monthly streaming services hasn’t been increasing and illegal downloading sites still exist as well. In that time, I believe Beat will contribute to the expansion of the country’s music market. We pay appropriate fees to the artists and songwriters for every song our users listen to. According to a report by the International Federation of the Phonographic Industry, (IFPI), music-streaming services like Pandora and Spotify that are advertisement based, have increased by 38.6 percent compared to last year.

The issue seems to be whether advertisement revenue can back up the business operation.

Currently, we are running a deficit. For example, we played 100 million songs in May. In royalties, we spent 800 million won ($722,120). But our income was 120 million won. So far, we’ve received investments of 18 billion won and it looks like we’ll be using it up by the end of this year. But now is the starting point. We aim to attract 20 million registered users. Two years from now, we expect to balance our income and expenditures. The investors who tried to stop me from starting this business when I was working on it now tell me that I’ve made a good choice and have been supporting me.

It looks like you’re shoveling sand against the tide.

Korea’s mobile advertisement market is expected to be 1.76 trillion won. Its size is about sixth in the world. Moreover, I also believe there’s no other content that’s optimized for smartphones than music. I only get a third of the salary compared to my time at Naver, but I’m full of energy. I consider this my last start-up. I will also do my best to popularize K-pop abroad. Beat launched overseas versions in April and entered into seven countries, including Indonesia, Vietnam, the Philippines, England and so on. We plan to increase that number.

Do you dream of becoming the next Lee Su-man [a popular music mogul and record producer] in the field of music distribution?

That’s an honor. Thanks to Lee, the door for Korean musicians to become global stars has been opened. In the popularization of K-pop, I at least hope to become the “little Lee Su-man.” The market is big. In Southeast Asia, the proper concept of copyright hasn’t even been established, not to mention the establishment of a proper system. I want to look for ways to grow together with local planning and advertising companies in each country.