As Blatter steps down, questions and answers

As Blatter steps down, questions and answers 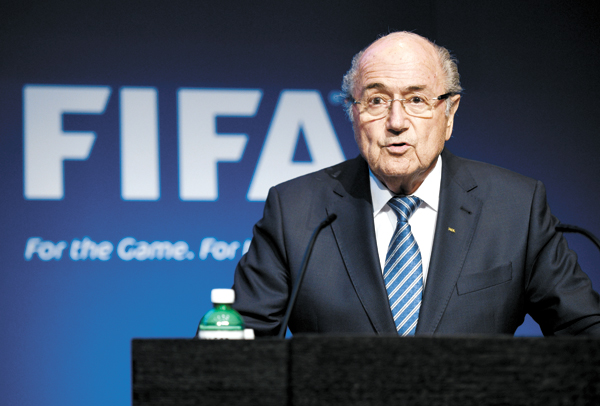 FIFA President Sepp Blatter speaks during a press conference at FIFA headquarters in Zurich, Switzerland, Tuesday. Blatter says he will resign from his position amid the corruption scandal. [AP/NEWSIS]

LONDON - Sepp Blatter and his mentor Joao Havelange have run global’s soccer’s governing body since 1974, handing out power to national federations and regional chiefs who awarded the men with loyalty.

All that could change in the next few months, as a scandal-plagued Blatter calls for a new election that will influence everything from how the organization is run to how it deals with sponsors, broadcasters, federations, leagues, clubs, players and agents.

Here are some key questions about what happened since last week’s U.S. indictments of FIFA officials and what will happen next.

Q. Why did Blatter change his mind and resign, just four days after he was elected to a fifth term in a 133-73 vote over Prince Ali bin al-Hussein of Jordan?

A. Blatter’s explanation was that he did not “have a mandate from the entire world of football - the fans, the players, the clubs, the people who live, breathe and love football.’’

Blatter defiantly brushed aside any criticism when he was re-elected Friday, amid the gravest crisis in FIFA’s history. After the arrest of former, current and future members of his executive committee, Blatter criticized U.S. authorities and the British media for pursing an anti-FIFA agenda.

The opening days of Blatter’s fifth term saw no respite in the corruption crisis.

What does Blatter expect to come out of the criminal investigations?

The New York Times and ABC News reported Blatter himself was under investigation by the FBI.

The Justice Department’s public assertions the investigation is ongoing “telegraphs that there are other people in their focus,’’ said Ed Wilson, a Washington lawyer whose practice focuses on cross-border money transactions.

American investigators have made clear through last week’s indictment that they view FIFA as rife with organizational corruption, and that means “people both up, down and sideways’’ from those indicted, Wilson said.

Another question is what Blatter knew about $10 million in payments, which the U.S. says was a bribe for CONCACAF officials to vote for South Africa as 2010 World Cup host. Blatter said he knew nothing about it.

More damaging details are expected Wednesday. A U.S. judge has approved the release of the transcript from the hearing in 2013 when Chuck Blazer pled guilty to corruption charges. Blazer is a former general secretary of CONCACAF and a former member of FIFA’s executive committee.

Was Blatter warned that FIFA finances were at risk?

FIFA has been coming under pressure from sponsors to overhaul the governing body, with Visa last week becoming the first to threaten to cut its ties unless there is evidence of reform. Questions were also raised in the House of Commons in London on Monday about whether the publicly funded BBC should be paying FIFA for World Cup broadcast rights when FIFA finances are under question.

Will Blatter’s resignation impact the next World Cups hosts?

A Swiss investigation is looking into the bidding process that saw Russia awarded the 2018 World Cup and Qatar voted the 2022 host in a contentious dual decision in 2010. The Qatari bid has attracted the most criticism, with accusations the wealthy tiny Gulf nation bribed its way to victory. Qatar has repeatedly denied those allegations, and a strong legal case is likely to be required before any host is stripped of soccer’s $5 billion event.

When will Blatter’s successor be announced?

Domenico Scala, chairman of FIFA’s audit and compliance committee, announced the presidential election is likely to “take place anytime from December of this year to March of next year’’ at an extraordinary FIFA congress.

Who are the candidates likely to be?

The favorite will be 59-year-old Michel Platini, the former French national team captain and the president of European soccer’s governing body since 2007. Platini decided not to take on former ally Blatter in last week’s election. Prince Ali hinted Tuesday he may have another shot at the presidency.

How much in put will Blatter have in reform proposals?

How lame a duck he will be will be determined by the executive committee, which likely will set up mechanisms to make proposals and will approve items put on the agenda for the extraordinary congress.