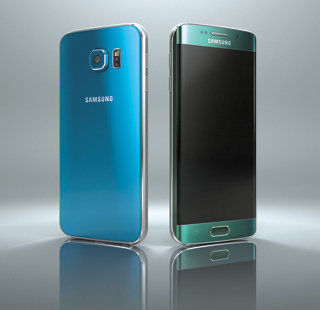 The Samsung Galaxy S6, left, and S6 Edge are predicted to become the best-selling models in the series’ history. Provided by the company

Sales of the Galaxy S6 and S6 Edge topped six million units between their launch on April 10 and April 30, largely because of improvements in design and functionality compared to the Galaxy S5, market research firm Counterpoint Research said.

The Hong Kong-based firm went on to forecast that Samsung will sell 50 million units of the Galaxy S6 series by the end of this year, defying recent predictions that sales could be slower than expected.

Some local securities and research institutes, including Hana Daetoo Securities, revised down the estimated sales to 45 million.

Samsung has not yet released any official figures, but a public relations official told the Korea JoongAng Daily that the estimate is “largely in line with actual sales figure.”

If the research firm’s numbers are accurate, the Galaxy S6 series will be the most successful model in the Galaxy family, surpassing the record 45 million units by the Galaxy S4.

But the report noted that the latest Galaxy models still fell behind Apple’s iPhone 6 in April sales, despite the iPhone’s earlier release date.

The firm said in a separate report earlier this year that the unique design of the Galaxy S6 Edge, with its curved display, would drive demand.

The exterior also improved, with Samsung ditching the clunky plastic body of the older models and replacing it with a sleek glass back.

“Considering that fewer countries were in the initial product release, it has had a slower rollout and lower marketing budget than the Galaxy S5, [but] the Galaxy S6 series can be considered to be performing better than the Galaxy S5,” researcher Tom Kang said in a statement.

The research firm also stated that the key factor for future sales is Samsung’s ability to supply curved screens.

“We believe the Galaxy S6 Edge could have sold more if there weren’t supply issues, but it is on track to become more popular than the standard version as Samsung’s marketing engine kicks in at full speed,” said Neil Shah, Research Director with Counterpoint.

“The curved glass is certainly going to be a challenge for production as it is the first of its kind and is navigating uncharted waters, so managing the supply with shifts in demand between the two models will be the key to maintaining momentum.”

Another researcher at the firm gave a bolder forecast.

“However, the window of opportunity to do so is short, as consumers don’t have much patience in a market with many alternatives.”