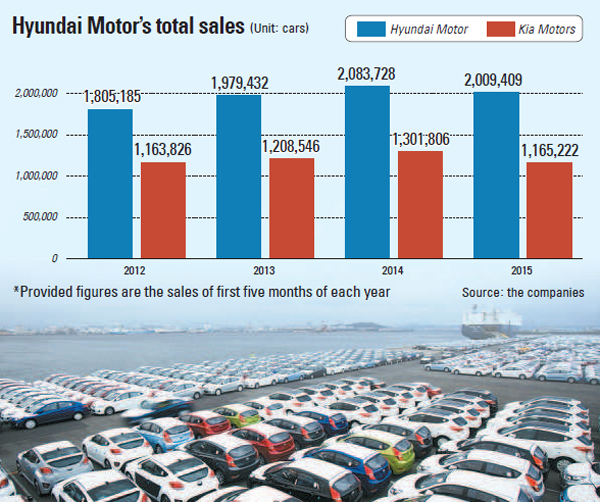 After reporting gloomy sales in the domestic market, Hyundai Motor got another poor score sheet in the international market.

Hyundai Motor said Wednesday it sold a total of 63,610 units in the United States in May, a 10.3 percent drop from a year earlier. Hyundai was the only major global carmaker that suffered a double-digit year-on-year decline last month, and the U.S. market actually grew by 1.6 percent from a year earlier, with 1,634,592 units sold thanks to strong demand for SUVs and pickup trucks.

In the entire global market, Hyundai sold 389,299 units in May, a 6 percent drop. For the first five months of the year the figure was 1.74 million, a 32.4 percent fall from a year earlier.

“The biggest reason was the weak yen,” said a spokesman for Hyundai Motor. “The impact of the weak yen won’t be offset in the market until the U.S. increases its interest rate. Another reason was decreasing demand in newly industrialized nations such as Brazil, Russia and China.”

Shares of Hyundai Motor tumbled 10 percent on Wednesday to 135,000 won ($121.84) per share, their lowest close since August 2010, making the company the worst-performing stock among any major automaker in the past year.

The data also showed that the company was losing ground against U.S. and Japanese automakers. Car sales were up with the growing popularity of SUVs and pickup trucks, but the two Korean auto giants - Hyundai and sister company Kia Motors - don’t make pickup trucks.

Other Korean carmakers are also struggling in the international market due to the weak yen and poor economic conditions in newly industrialized nations. Ssangyong Motor also saw its global year-on-year sales from January to May decline by 40.4 percent, selling only 20,438 cars.

“Since the value of ruble dropped by 40 percent from a year ago, we temporarily decided not to sell popular models like the Korando SUV in Russia,” said a spokesman of Ssangyong. “Selling a Korando in Russia now means that we are selling it at a 50 percent discount compared to last year.”

Korea’s exports in general are soft, with the exception of phones and other consumer electronics.

According to the Korea International Trade Association, exports from January to May declined by 5.6 percent to $222.1 billion. In May, exports dropped by 10.9 percent from a year earlier, mainly due to poor performances in cars, oil refining and steel.