In spread of MERS, a mutation is most feared

In spread of MERS, a mutation is most feared 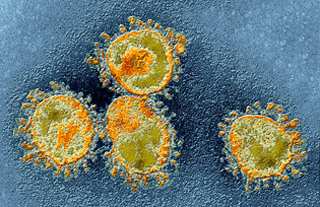 A photograph of the MERS virus taken in the Middle East. [JoongAng Photo]

As the spread of the Middle East respiratory syndrome (MERS) shows no sign of being controlled in the two weeks after the first confirmed case was reported on May 20, questions have emerged about the viral disease that has claimed two lives.

The disease is caused by a strain of coronavirus that was first identified in 2012 in Saudi Arabia. It has claimed 465 lives out of 1,142 people infected worldwide as of May 16, a 40.7 percent fatality rate. According to the World Health Organization (WHO), “Understanding of the virus and the disease it causes is continuing to evolve.”

Once infected, a person can show symptoms of a fever, cough, difficulty in breathing or diarrhea. Pneumonia is also a common symptom. The WHO warns that the disease could cause serious organ failure, especially of the kidneys, and appears to be a particular risk to people with weakened immune systems, older people and those with chronic illnesses such as diabetes, cancer or chronic lung diseases.

Young and healthy patients with sound immune systems can be infected without showing any symptoms.

MERS is a strain of coronavirus that has a high chance of producing genetic variants in the process of infection. That raises worries the virus could evolve and make current infection prevention measures ineffective, especially if airborne infection becomes possible in the future.

Government and civilian officials downplay the possibility of a MERS mutation, saying the relatively rapid increase in the number of infections was the result of people going to hospitals visited by Patient No. 1 before he was diagnosed. And many of the patients who were infected were at the hospitals for other illnesses and their immune systems had already been weakened.

But Kim Jeong-ki, professor of pharmacy at Korea University, said the possibility of a genetic variant cannot be ruled out.

“A genetic mutation often takes place over a long time period,” he said. “But it can also occur in a short period of time. The virus can become a variant during its latent period in a host.”

Kim added that the claim that MERS has a low infection rate lacks scientific grounds because it is a mere estimate based on cases reported in the Middle East.

The conclusion that older people with weakened immune systems are more prone to contract the disease can be supported by the makeup of patients in Korea. Of 30 people diagnosed with the MERS as of Wednesday, 17 were over the age of 49. The two fatalities were a 57-year-old woman and a 71-year-old man.

Of the 30, five contracted the virus from Patient No.1 after they shared a six-patient hospital room with him at the second hospital he visited between May 15 and 17. One of the five is Patient No. 1’s wife, who tested positive on the same day as her husband.

The 68-year-old man contracted the virus on a trip to the Middle East last month and is the source of all infections except for three cases as of Wednesday.

The fact that the two patients who died did not share a room with No.1 but were hospitalized in the same ward has increased fears over the virulence of the strain.