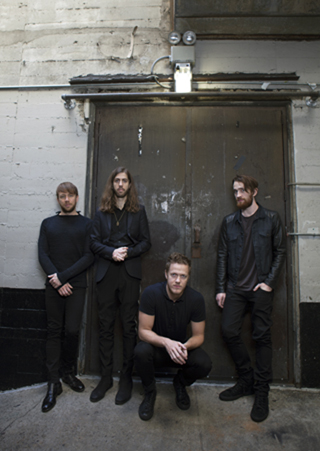 From left, Ben McKee, Daniel Wayne Sermon, Dan Reynolds and Dan Platzman of Imagine Dragons pose for a portrait at the Mayan Theater in Los Angeles in February.[AP/NEWSIS]

LOS ANGELES - Grammy winners Imagine Dragons will launch their second headlining arena tour this week, but they remember the days when they opened up for anyone - including a mime.

“It was an opportunity,’’ bassist Ben McKee said in a recent interview. “This was early, early on and ... we had the opportunity to play with a mime at a junior varsity cheerleading squad at a shopping mall in Henderson, Nevada. We jumped on it.’’

Bandleader Dan Reynolds recalls “literally like five people in the mall that day.’’

“They set up tons of seats which makes it even worse,’’ the 27-year-old singer said. “That was maybe the lowest - that was the lowest low.’’

Imagine Dragons have moved far away from opening for other acts on the road as the band launches its North American tour Wednesday in Portland, Oregon. They had a successful run with arenas last year after their debut, “Night Visions,’’ continued to reach new heights: It went on to sell more than 2 million units and launched back-to-back hits with “It’s Time,’’ “Demons’’ and the group’s signature smash, the Grammy-winning “Radioactive.’’

The young band, which released its debut album in 2012 and its follow-up earlier this year, has quickly risen to arena status. The stops on the Smoke + Mirrors Tour include the Barclays Center in Brooklyn, New York; Bridgestone Arena in Nashville, Tennessee; and the Forum in California.

Reynolds credits the band’s success with hours and hours of practice and the motto: “Say yes to every gig.’’

“I think it was pretty overwhelming at times for us to walk out and actually believe it,’’ Reynolds said. “It’s funny, I went home from the arena tour and my mom sat down with me, her first question was like, ‘So do people really come fill out the arenas to watch your band play?’’’

“To my mom, a year and half before that, she would come to see me at some small club in California and it would be 10 people there.’’

The band, which also includes guitarist Wayne Sermon and drummer Daniel Platzman, released its sophomore album, “Smoke + Mirrors,’’ in February. It debuted at No. 1 on the Billboard 200 albums chart. The Las Vegas-based foursome says life hasn’t changed too much, though they have topped the charts and won multiple awards.

“We didn’t have crazy lives before. We’re all pretty much giant music nerds and we do music and the fact that we get to do music on a stage with four people makes us really, really happy,’’ said Platzman. “It’s just the crowds have gotten bigger.’’

“It’s a cliche thing, but literally, really, none of us got into music thinking we’d have money or wanting to have money,’’ Reynolds said. “My friends come over to my house I bought and they’re like, ‘This is your house?’’’

“And I’m like, ‘What is that supposed to mean?’ It’s like they’re expecting the ‘Night Visions’ mansion.’’ AP