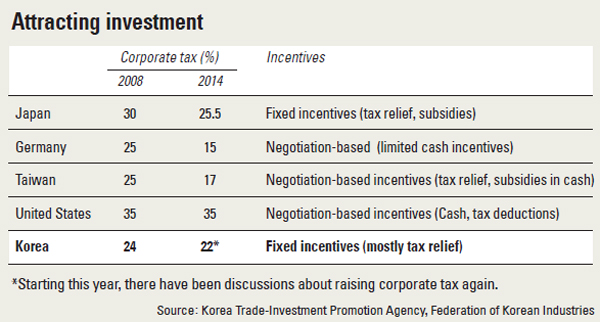 The Federation of Korean Industries (FKI), which includes major manufacturing conglomerates like Samsung, Hyundai Motor and LG, released a report on Thursday that called for three measures: the expansion of cash incentives, further slashes to corporate taxes and more flexibility for corporate regulations when it comes to investment.

The report explained that such stimulus policies will trigger a “renaissance of the Korean manufacturing industry” similar to those taking place in the United States, Japan and Germany, which have fought against worldwide low growth by reemphasizing manufacturing.

“Manufacturing creates quality jobs and triggers technological innovation across the nation’s industrial scene, which of course contributes to economic growth,” wrote Yoo Hwan-ik, head of the FKI’s industry department, in the report. He added that the manufacturing industry is crucial to revitalizing exports because Korea’s exports are 90 percent dependent on manufactured products. Last month Korea’s export tumbled more than 10 percent compared to a year ago.

First, the report said the Korean government should create more flexible financial incentive policies, making each case more negotiation-based and offering additional incentives such as cash subsidies. The only method so far has been providing tax deductions.

A Norway-based material manufacturer sought to invest about $2.2 billion in Korea in 2008, but later ended up investing in Singapore because negotiated with the company and provided cash subsidies, the report said.

The report cited the Barack Obama administration’s policy of distributing large-scale cash incentives to local and foreign manufacturers working in the United States.

Foreign companies like battery maker LG Chem and Toyota built extra factories in the country, and nearly 700 American manufacturers that had gone overseas, like Boeing and GM, brought back their production lines, investing billions of dollars and boosting employment, according to U.S.-based business consulting firm A.T. Kearney.

The FKI report said the government should lower corporate taxes, following the global trend, to further encourage investment in Korea.

In Korea, the maximum corporate tax rate currently is fixed at 22 percent, which has been steadily lowered from 30 percent in 1986 in hopes of enhancing the competitiveness of Korean companies, eventually collecting more taxes from increased corporate profitability.

However, lawmakers of both the ruling Saenuri Party and the main opposition New Politics Alliance for Democracy starting early this year have called for the need to raise corporate taxes up to 25 percent to boost the central government’s tax revenue.

The report also emphasized that the government should be more flexible with corporate regulation, in hiring and layoffs as well as corporate restructuring. Citing Japan and Germany as examples, the report explained how the two countries stayed strong even after the global financial crisis of 2008, thanks to temporary regulation exemption laws and increasingly flexible labor regulations.

“Korea already has a bunch of policies to bring back manufacturers that moved to countries with low personnel cost and less industrial regulation than at home,” Yoo continued. “However, they’re not enough. The government should take these even higher so that big-name companies come back home.”

However, Joo Hyun, senior research fellow at the Korea Institute for Economics and Trade, said the government has already rolled out enough export-boosting policies, and that now is the time to focus on preparing more mid- to long-term export strategies with specific time lines.

Joo also emphasized that the even if the government eased regulations and expanded incentives, it would mean nothing if local manufacturers misused the policies to benefit themselves.

“Unlike those advanced manufacturing nations like Japan and the United States, Korean manufacturers make key business decisions based on their owner family’s inheritance issues,” Joo said. He added that manufacturers ought to focus on enhancing the quality and competitiveness of their products.