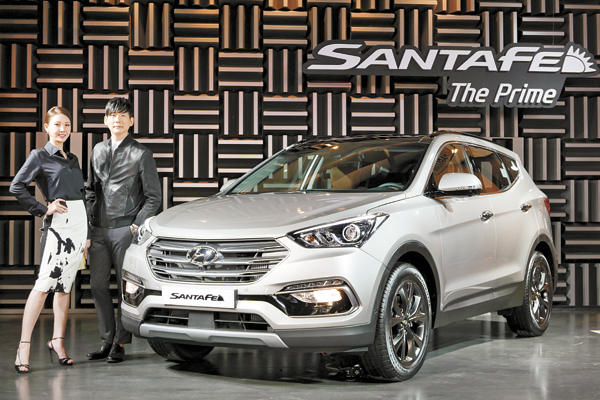 Hyundai Motor introduced the Santa Fe Prime, an upgraded version of its 2015 model, at the Gangnam Auto Square in southern Seoul Thursday. Provided by the company

Hyundai Motor introduced an upgraded version of its Santa Fe SUV, dubbed the Santa Fe Prime, on Thursday, hoping to once again have the best-selling SUV in the country.

The company said the primary reason for the upgrade was to meet the so-called Euro 6 emission standards, but that it also included new safety and convenience features. Hyundai Motor hopes to lure back the customers it lost to its sister company Kia Motors’ Sorento, which went on sale last August. The Santa Fe was introduced in June 2000 and the latest, third-generation model was released in April 2012.

The Santa Fe has been a best-selling SUV in Korea for years, but sales started declining this year after the full-change Sorento came into the market. Hyundai sold 28,533 Santa Fes through May of this year, but sold 36,190 during the same period last year. Meanwhile, Kia watched its Sorento ride high, selling 31,655 in the first five months of the year.

Hyundai doesn’t want to see their best-selling SUV fall behind because of its importance for the company in both the domestic and international market. Last year, the 2015 Santa Fe was the best-selling SUV in Korea with a total of 77,689 units sold, and was also ranked sixth among all cars by sales. The company’s flagship mid-size Sonata was the top selling model, with 108,014 sold.

One of the most significant upgrades for the latest model is safety. Its predecessor was rated “marginal” by the Insurance Institute for Highway Safety, its third-lowest rating, in a small overlap front crash test conducted in April.

“We improved the hardness of the SUV’s frame to the level of other models like the Genesis sedan and Tucson SUV, which were developed stronger in preparation for the test,” Hyundai Motor spokesman Hwang Kwan-sik told the Korea JoongAng Daily.

The company also added autonomous emergency braking, which automatically stops the car after detecting a crisis on the front side, as well as a blind spot detection system. It also added a 1-megapixel camera at the car’s rear, which the company said was the first among Korean SUVs, and a dynamic bending light system, where the head lamps follow the direction of the car’s steering wheel.

“The price for the R2.0 model hasn’t changed from its predecessor, though we added many premium safety options,” Hwang added. “Considering that the prices of other cars that met Euro 6 standards rose by about 3 million won, our price strategy will help us attract more consumers and strengthen our brand power as the leading SUV seller in the country.” The company said it hopes to match last year’s sales of the SUV, or 77,689 vehicles.