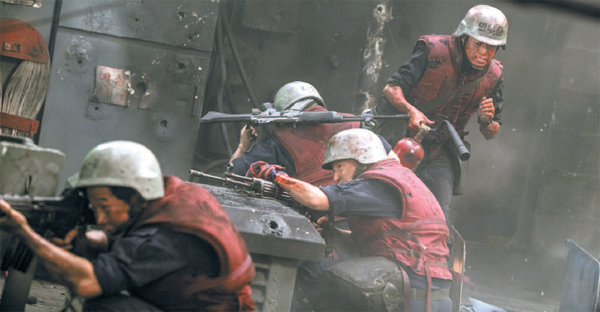 Stills from Kim Hak-soon’s upcoming film “Northern Limit Line,” which is based on the deadly Second Battle of Yeonpyeong between North and South Korea in 2002. [JoongAng Ilbo]

For Koreans, 2002 is an unforgettable year.

Many people still remember the festive mood that swept the country when the national football team advanced into the semifinals of the World Cup, jointly held in the squad’s home nation and in Japan.

Thousands of people went out onto the streets, hoping for another victorious moment.

But there are some who remember that year differently, particularly the family members and close acquaintances of those who lost their lives in the Second Battle of Yeonpyeong.

The fighting broke out on June 29, the day of the Korean football team’s third-place playoff game with Turkey.

That morning, a North Korean guard ship raided one of the South’s high-speed boats on the western coast of the peninsula near the Northern Limit Line, the de facto maritime sea border between the two nations.

The battle was recorded as a South Korean victory, but the deadly fight continued for 30 minutes and six of Seoul’s naval staff died while 18 were seriously injured. The Chamsuri 357 boat sank deep under the sea. 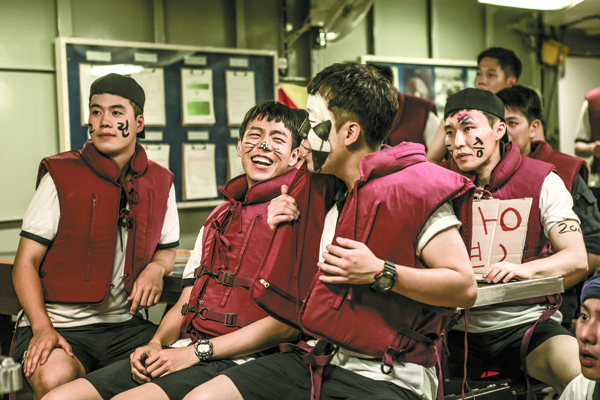 Stills from Kim Hak-soon’s upcoming film “Northern Limit Line,” which is based on the deadly Second Battle of Yeonpyeong between North and South Korea in 2002. [JoongAng Ilbo]

Thirteen years since the tragic incident, the Second Battle of Yeonpyeong has been resurrected in the upcoming movie “Northern Limit Line,” written and directed by Kim Hak-soon.

The film finally opened after seven years after stumbling with obtaining investment and a distributor. As a last resort, the film turned to crowdfunding, amassing a third of the production fees (2 billion won, or $1.8 million) from an unprecedented 7,000 people.

“I didn’t expect the production fees to get this big. I was just determined to make this incident into a movie, feeling empathy for the bereaved family,” director Kim said during a press event at Wangsimni CGV, eastern Seoul, on Monday.

“When I ran out of money, I didn’t have any solution but to appeal to the public, explaining clearly what kind of movie I wanted to make.”

The film realistically portrayed the intense and brutal naval battle on screen, for which the director said he meticulously calculated every second of to reproduce the soldiers’ movements as precisely as possible. 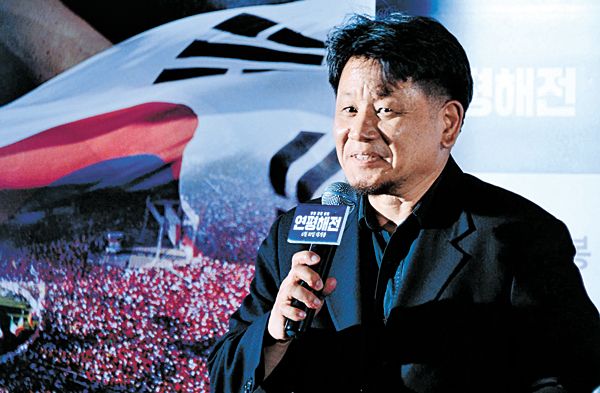 Director Kim talks about his latest movie during a press conference at Wangsimni CGV, eastern Seoul, on Monday. [NEWSIS]

But another vital focus of the movie was the human drama element.

Centering on three fallen soldiers - Captain Yoon Young-ha (Kim Moo-yeol), Sergeant Han Sang-gook (Jin Goo) and Corporal Park Dong-hyuk (Lee Hyun-woo) - the film spends more than half of its 130-minute running time showing the convivial everyday life they experience while in the navy, as well as each of their loving families back at home.

Most parts of the film concerning the personal lives of the soldiers is “fiction,” according to Park, but he said he met with the bereaved families several times during the production process for discussions.

But at the same time, the emphasis on emotion has led to some criticism that the film exaggerates patriotism.

Also, a scene with a news report about then-incumbent President Kim Dae-jung visiting Japan for the World Cup closing ceremony during the funeral was especially considered to contain obvious political intentions.

“I wasn’t going for a political approach,” the director told the JoongAng Ilbo, a Korea JoongAng Daily affiliate.

“I just wanted to depict an ironic situation where one part of the country is celebrating a festival while the other part is dying,” he said, adding that it was not an ideological approach but a humanitarian one.

The film opens in theaters nationwide on Wednesday.