A political base to back Park Chung Hee

A political base to back Park Chung Hee 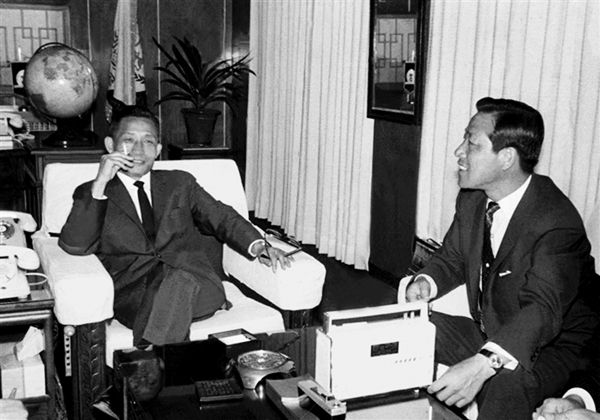 Park Chung Hee, left, chats with Kim Jong-pil on the night of the presidential election on May 3, 1967 at the Democratic Republican Party’s headquarters in Seoul. Park soundly beat his rival Yun Po-sun by more than a 10 percent margin. [JoongAng Photo]

In the summer of 1961, when the military revolutionary government was in full swing producing national development plans, I began to feel an urgent need to form a political body to represent ourselves. A political body in the form of a party would fully embody our philosophies and policy objectives.

I knew that the people would soon get tired of being commanded by a state led by military men. I was convinced that the military leadership would not last long. What would happen to us, without the launch of a political party, was clear after looking at Egypt and Turkey at the time, both of which had preceded us in undergoing military revolutions. I was keenly aware that the success of our May revolution [coup] hinged on how smoothly and quickly we could transition our authority to a civilian government.

On Aug. 12, 1961, Chairman Park Chung Hee of the National Reconstruction Supreme Council issued a special statement in which he declared that a new Constitution would be promulgated by March 1963 and that he would hand over governing authority to a civilian government. A few days later, I called in my subordinates to study ways to launch a political force immune to corruption that could inherit our objectives. 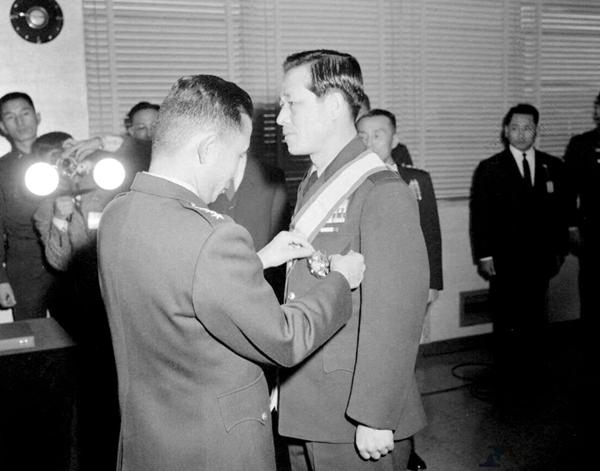 Park Chung Hee gives Kim Jong-pil, right, the medal of national security merit on Jan. 7, 1963 as Kim steps down as chief of the Korean Central Intelligence Agency to prepare for the launch of the Democratic Republican Party. [National Archives of Korea]

In December 1961, I briefed Park on my plan for a party, telling him that we needed to launch it so that we could maintain power in our transition to a civilian government. Park asked if it was not too early to think about making a party of our own.

I said, “We should not delay creating one. But doing so will invite a barrage of criticism that we are trying to seize power again as a civilian entity. So I ask you to remain tight-lipped about this for the time being. I will not tell any members of the Supreme Council either.”

Park nodded and said, “Go ahead with your plan.”

Preparations for a party launching were conducted in secret. One of the first steps I took was to recruit young and bright minds. I tried to find people with no experience in politics, thinking that we needed new faces to head a new government full of fresh ideas.

I recruited former New York Times Seoul reporter Seo In-seok along with other people who taught at universities. Many of the people I asked to join the new party responded positively after hearing my vision for the country. After recruiting founding members of the envisioned party, we began having lectures on a variety of political, social and economic issues with professors invited for the occasions.

I briefed Park on every detail in the progress to launch a party. He appeared somewhat skeptical, asking me who had been involved and how we had been planning to form a party. I asked him to come to one of our lectures, but he always declined. Nevertheless, I did my utmost in forming a party with the right people. As my work neared its end, I again asked Park to attend one of our meetings in August 1962. This time he did. Meeting smart people, Park seemed satisfied with the work we had done and what we had built. “Good luck to you guys,” he said smiling at the members. It was his first positive gesture to the new party.

On Jan. 5, 1963, I tendered my resignation as chief of the Korean Central Intelligence Agency. Looking at the resignation, Park smiled and said, “You want to step down because of the new party, right?”

I said, “Yes, that is why. Whether we can achieve the goal of our revolution all depends on whether you can be the next president. And your bid for the Blue House hinges on the party I am working to form now. So I will be devoted to launching the new party from now on.”

Park asked me who should be named the new spy agency chief. I told him to appoint a person whom he could trust. I said, “You must be elected president with the full support of the party.” Park smiled.

On Jan. 18, we decided on the name of the party: The Democratic Republican Party (DRP). It was my idea to use the names of the two parties in the United States. It reflected my desire to take inspiration from democratic values enshrined in the U.S. system.

Over a 16-year period from 1963 to 1979, the DRP was always behind President Park in achieving his ultimate goal of modernizing this country. When I see the current political landscape, parties are always changing their names or merging with others. In democratically advanced nations, a political party sustains its name and philosophy over decades. I think that is how the public comes to trust their political establishment.

I chose a cow as an emblem for the party. It was a decision I made because I wanted to emulate the Democrats and Republicans in Washington, who use a donkey and an elephant. I picked a cow to indicate that our party would work as hard as a cow would for his owner on a farm. The fact that I was born in the year of the cow also contributed to the decision.