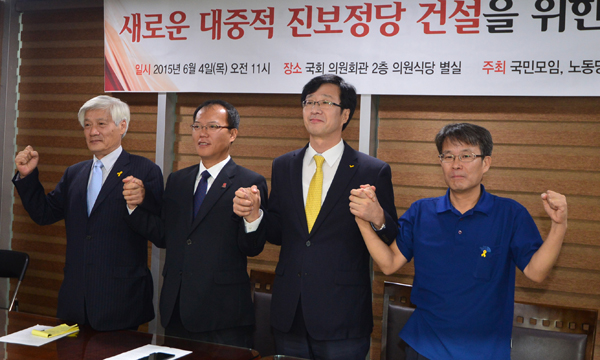 Four liberal groups announced on Thursday a plan to create a new, more popular liberal political party before the end of this year, signaling a massive political realignment in the progressive arena.

The Justice Party, the Labor Party, the Labor Politics Solidarity and the Kookmin Moim held a joint press conference at the National Assembly and declared their intention to build a new political party, criticizing the largest main opposition New Politics Alliance for Democracy (NPAD) for having failed to appeal to voters.

Leaders of the four groups, including Justice Party Chairman Chun Ho-sun, said overcoming neoliberalism and building a society where labor was cherished were their goals.

The plan to launch a new party signaled a massive rearrangement in the liberal arena ahead of next year’s legislative elections. After the Unified Progressive Party (UPP) was disbanded last year for its pro-Pyongyang doctrines, the four groups were left as the main players in the liberal arena aside from the NPAD.

In the aftermath of crushing defeats in the April by-elections, the NPAD has also experienced factional strife among loyalists to the late President Roh Moo-hyun and other party members.

The four liberal leaders added that the NPAD had failed the people due to its incompetence, political infighting and confrontations.

The liberal leaders promised that the newer, stronger liberal party they proposed would be realized before the end of this year, with a tangible outcome in September.

The alliance is expected to be an important experiment for the four groups that will determine their future survival. A similar alliance was formed in 2012, when the UPP managed to become Korea’s third-largest party by uniting progressive voters.

At the time, Justice Party members belonged to the UPP, though they left the party later.

The Justice Party currently has five lawmakers inside the 298-member National Assembly, but it failed to win any seats in the recent by-elections.

The Kookmin Moim had an ambitious goal to establish a political party in September, though the plan faced a hurdle when one of its members, Chung Dong-young, a former opposition lawmaker and the 2007 liberal presidential candidate defeated by Lee Myung-bak, faced another loss in the April by-elections.

He formerly belonged to the NPAD but left to create his own party.

According to sources, Chung left for China last month and did not actively participate in the discussion over the formation of a new liberal political party.

Observers also noted that there is a possibility that the new party could help the conservative ruling Saenuri Party in the next elections by dividing the liberal votes.

Because the NPAD refused to form an electoral alliance, which split liberal votes in the April by-elections, the Saenuri Party won three of the four seats at stake. The remaining vacancy went to Chun Jung-bae, a former NPAD lawmaker who left the party to run as an independent.

“One of the key reasons for our defeat was that we did not form an alliance,” NPAD Rep. Park Jie-won said in an interview with TBS radio. “The opposition must form an alliance, no matter what happens, to win the election. The new political party and the NPAD must create an alliance in the next legislative and presidential elections to fight the Saenuri Party.”

However, it remains to be seen if the new liberal party will join forces with the NPAD after its establishment. The four groups denounced the NPAD on Thursday for its obsolete political practices.

In a KBS radio interview, Rep. Shim Sang-jeong, the floor leader of the Justice Party, said the new liberal party would carry out bold reforms.

She added that it also would not promote approaches toward North Korea that were unreasonable or went against common sense.

Chun, the former justice minister under the Roh administration and a four-time lawmaker, has said he will create his own political group in Gwangju, a liberal stronghold.