Students at a girls’ high school in Seoul wear face masks on Thursday. The fear of MERS spreads as the number of patients rose to 36 as of Thursday. [NEWSIS]

Middle East respiratory syndrome (MERS) continued to scare the public in Korea after a doctor at a well-known hospital in Seoul tested positive along with a noncommissioned officer at Osan Air Base.

The two infections announced Thursday raised concerns because the hospital in Seoul takes care of patients from across the country and the military is a community that should be able to isolate itself from health threats.

The Ministry of Health and Welfare Thursday announced six more cases of MERS, bringing the total number in Korea to 36. A third fatality was announced Thursday: an 82-year-old male patient at a hospital in Daejeon.

The noncommissioned officer on the air base, located in Pyeongtaek, Gyeonggi, was not included in the list of confirmed cases yet. He tested positive for MERS on Wednesday at a local clinic but his final confirmation result was not disclosed as of press time Thursday. 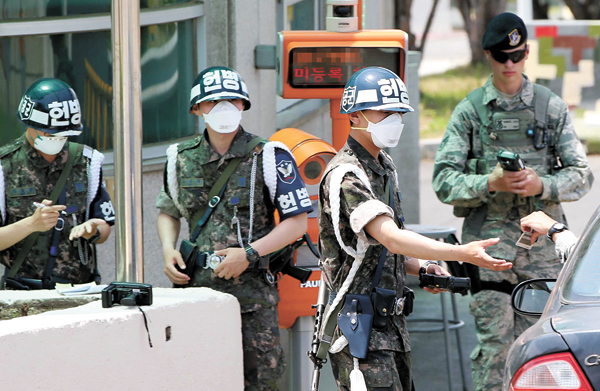 Mask-wearing military policemen check visitors at a main gate to the Osan Air Base in Pyeongtaek, Gyeonggi, on Thursday after a noncommissioned officer at the base tested positive for MERS. By Oh Jong-taek

Three of the six new cases, including the doctor in Seoul, the 82-year-old who died, and a 69-year-old male are third-generation MERS infections, meaning they were contracted from people who were infected by Patient No. 1, 68, who tested positive on May 20 after returning from a 16-day business trip to the Middle East.

The 82-year-old and 69-year-old shared a hospital room with Patient No. 16 between May 28 and 30. Patients No. 23 and 24 contracted the disease from the same man, raising the possibility that Patient No. 16 may be a so-called super-spreader, someone whose is more infectious than other sick people.

The infection of the doctor working at the hospital in Seoul, who is Patient No. 35, was believed to be passed from Patient No. 14.

Also, according to a health authority official, Patient No. 35 was found to have treated about 40 patients at his hospital in Seoul, including diabetes patients who are considered vulnerable to MERS, on Friday and Saturday. Taking into account the family members of those patients, about 40 to 50 people are believed to have had contact with the doctor.

Patient No. 14 stayed in a hospital ward with Patient No. 1 from May 15 to 17. He travelled to the Seoul hospital by an intercity bus with other passengers on May 27, and the health authorities were not aware of it.

After arriving in Seoul, he had difficulty breathing and called 119 for help. He was sent to a nearby hospital, where he transmitted the disease to Patient No. 35, who was treating a patient in the bed next to his.

The health authorities have not tracked down passengers on the bus.

“We were aware he was taken to the hospital in an ambulance, but we did not know that he took a bus,” said a health ministry official on Thursday.

Korea has a total of six third-generation patients, but the health authorities are still playing down the possibility of MERS spreading wildly, claiming that all third-generation infections occurred within medical facilities.

In the meantime, the military authorities are concentrating on preventing MERS from spreading among the troops after the noncommissioned officer tested positive for MERS.

“Chief Master Sgt. Kim of the Korean Air Force is believed to have contracted the disease while he was treated for an injury to his Achilles tendon at a hospital [in Pyeongtaek],” said an official of the National Defense Ministry on Thursday. “We are doing our best to prevent further spread of the disease in the military forces.”

According to the defense ministry, about 80 people are being isolated as a precaution as of Thursday. Six of them visited Kim the hospital and are being isolated in hospitals. About 10 others are quarantined at military hospitals for possible contact with kim. About 60 others are soldiers in the same unit as Kim. They are staying in their residences or barracks. “We have isolated about 80 people, but only about 20 of them are considered potential patients,” said the official.

The Air Force also provisionally suspended all soldiers from taking leaves or leaving bases, and all military forces in the country, including the Defense Ministry, are checking body temperatures of those who enter or exit military bases starting today.

The death of the 82-year-old patient, or Patient No. 36, is the first case of a fatality in the third generation. He shared the same six-patient hospital room with Patient No. 16 from May 28 to 30. Initially, he had been treated for chronic renal failure at the hospital and was isolated on May 30 after it was found that he had contact with Patient No. 16.

He tested negative in the first examination on Monday, but his second test was positive on Wednesday. He died Wednesday night and was finally confirmed to have had MERS on Thursday.

The fact that Patient No. 1 transmitted the disease to 30 out of 36 patients has suggested that the strain spreading in Korea might be different from the one spreading in the Middle East.

“We will explain a possible mutation of the strain as soon as possible, probably tomorrow,” Kwon said in Thursday’s briefing.

The Health Ministry has sent samples from confirmed patients to the Korea National Institute of Health for examination.

The government is also planning to send them to Erasmus Medical Center in the Netherlands and the U.S. Centers for Disease Control and Prevention for further examination.

Despite the health authority’s opposition, more and more schools are deciding on provisional closings. The Ministry of Health and Welfare previously said that shutting down schools was not a wise decision from a medical perspective.

As of 3 p.m. on Thursday, a total of 916 schools across the country have reported to the Education Ministry that they are cancelling classes or completely closing, including 334 kindergartens, 458 elementary schools, 90 middle schools, 12 high schools, 15 special education facilities and seven universities. Gyeonggi, where most of patients are, accounted for 683 of them.