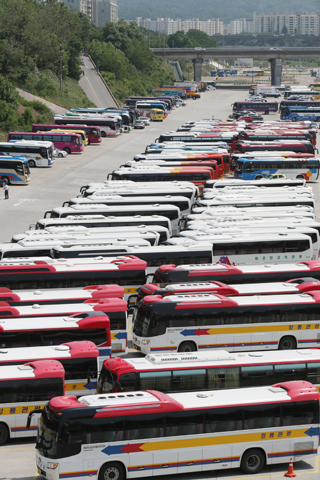 Many tourist buses sit idle on a parking lot at Tancheon in southern Seoul on Thursday as a lot of foreign and local tourists cancel their planned travel to Seoul because of the national outbreak of MERS. By Shin In-seop

After more than 300 passengers aboard the Sewol ferry lost their lives on April 16, 2014, when it suddenly capsized in waters off the country’s southwestern coast, people here paid tribute to the victims by downsizing the scale of public festivities and foregoing family outings.

School field trips were canceled when it turned out that most of those onboard the doomed ferry were 11th-grade high school students on a class field trip en route to Jeju Island.

Consumer sentiment declined in the months after the accident - the country’s worst maritime disaster - as Korea’s citizenry mourned the loss of so many young lives.

And now, one year later, the country has again fallen into a seemingly familiar slump, only this time a sense of panic has replaced the feelings of grief felt by so many. This time, concerns are focused on a potentially fatal respiratory disease from the Middle East. And with no vaccine or known cure, many locals have scrambled to take matters into their own hands.

One way has been by staying indoors. Regional governments across the country have announced plans to cancel a wide range of group activities, from festivals and marathons, to press conferences.

In Dangjin, South Chungcheong, a potato festival slated for June 20 was canceled, and so was a health care program planned to be held on Tuesday.

Civil defense training sessions that were to be held in two weeks were also called off, as Dangjin Mayor Kim Hong-jang asserted that the city “will not organize any large-scale gatherings in the wake of Middle East respiratory syndrome (MERS).”

An in-line skating competition was also among the regional festivals abruptly canceled.

The Jeollabukdo Council of Sport for All announced Thursday it would postpone the gathering, which was scheduled to host approximately 2,000 people from across North Jeolla this weekend. A new date will be determined once the outbreak settles down, an official from the council said.

The Incheon Metropolitan City Office of Education also relayed its own plans of prevention, announcing the same day that it had called off a training program for 500 parents affiliated with the city’s school governing body.

A press conference for parties concerned with Incheon’s private kindergartens, scheduled to start Thursday, was additionally canceled over fears surrounding the virus.

In Daejeon, an event commemorating the anniversary of the inauguration of Mayor Kwon Sun-taik, slated for June 18, was postponed. And a croquet competition slated for next week was moved to October.

Sporting events were also hit hard by the MERS scare and a number of games were postponed.

Organizers of the 2015 Suwon Continental Cup U-17 football tournament said they would reschedule their games from Aug. 31 to Sept. 8, after deeming that the original dates, June 10-14, would be too dangerous.

One of the deciding factors, organizers continued, was the news that the Brazilian team had booked a flight to Korea via the Middle East.