Let your apps do some cooking in smart kitchen

Let your apps do some cooking in smart kitchen 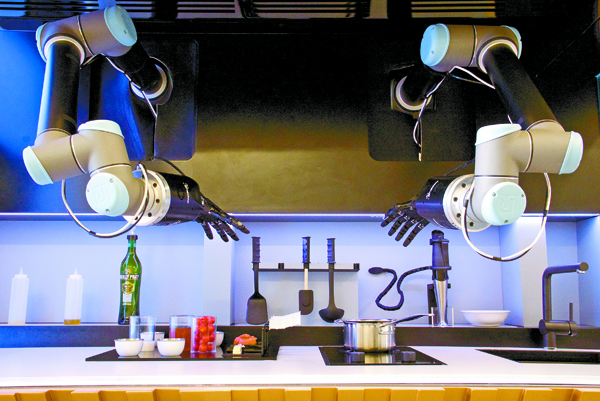 From assembling and chopping ingredients to cleaning dirty pans, robots are coming into the kitchen to help humans prepare meals.

Cooking machines are no longer limited to a basic function and a few buttons. They’re starting to do more sophisticated things with Wi-Fi-enabled features that allow for remote controlling.

The pair of articulated robotic arms can actually create dishes. The arms move like those of a master chef in a specially designed kitchen equipped with stovetop, oven, sink and utensils. The arms can follow some 2,000 recipes.

Created by NASA robotics supplier the Shadow Robot Company, the arms mimic the movements of human shoulders, elbows, wrists and fingers. The company said that movements of BBC “MasterChef” winner Tim Anderson have been carefully programmed into the robotic arms.

The robot learns the movements after they are performed by a human chef, whose movements are captured by a 3-D camera and translated into algorithms.

Moley Robotics said it will sell the cooking robot for the equivalent of 17 million won ($15,300) on the global market starting in 2017.

Somabar can make a precise and consistent cocktail in under five seconds.

To make a cocktail, users connect to the Somabar via an app and pick the drink they wish it to make. The machine consults its database of recipes. With the click of a button, the machine mixes the ingredients and pours the cocktail into a cocktail glass.

Twenty-four percent of people who cook for themselves or others use a tablet or smartphone all the time in the kitchen to find information about food or consult recipes, according to a survey conducted by NextMarket Insights in 2014. Another 34 percent said they use the technology sometimes. 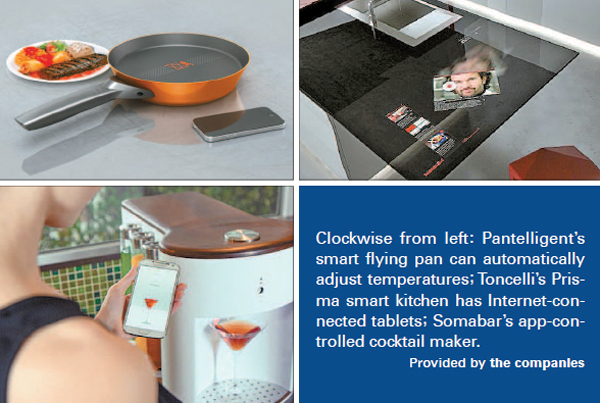 “In the past, the central area at home used to be the living room, but that has shifted into the kitchen,” said Jang Jae-hyun, a researcher at LG Economic Research Institute.

The relatively nascent global smart kitchen appliances market was valued at $476.2 million in 2013, according to research firm Transparency Market Research. Backed by strong consumer demand, the market is expected to reach $2.73 billion in 2022.

Toncelli’s Prisma smart kitchen has Internet-connected tablets in the dining table so people can do whatever they want - from referring to recipes to watching movies.

It is integrated with Samsung Galaxy Tab technology. First presented at Eurocucina 2012, Toncelli collaborated with Experientia, a design consultancy, resulting in this technologically advanced dining table.

Many conventional kitchen accoutrements are getting smarter.

A smart flying pan called Pantelligent can transmit data to a phone app through Bluetooth. Just tap the phone on the pan’s handle to get such data as how hot the pan is, when to add ingredients, and when to stir or flip.

A startup called Drop has released a smart scale that is designed to instruct users on the optimal ratio of ingredients. The company launched preorders last year for its connected kitchen scale, which not only weighs ingredients, but works with an iPad app to serve up installed recipes.

A series of reports by NextMarket Insights predicted that the smart kitchen market will grow further.

“Whether it’s food storage, preparation, or the act of cooking itself, the arrival of new technologies will enable consumers to become more efficient, knowledgeable and possibly even better cooks in coming years,” said chief analyst Michael Wolf.