Buzz over brunch stays strong a decade on

Buzz over brunch stays strong a decade on 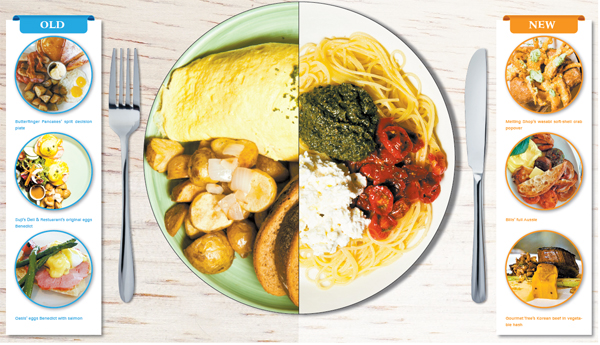 The four career women portrayed in the popular American drama series “Sex and the City” (1998-2004) garnered attention in Korea in the mid-2000s. In the eyes of the Korean audience, particularly female fans, the competent women meeting up in a fancy restaurant late in the morning to enjoy a U.S.-style dish seemed cool and alluring. Since then, the brunch industry has been one of the hottest businesses in the country, with the trend marking its 10th anniversary here this year. Though the main customers of these types of restaurants were predominantly celebrities and career women at the start, now more and more people are visiting brunch cafes, so much so that the phenomenon has become embedded in local lifestyle. In accordance with the increasing demand, new brunch restaurants are appearing in various regions, while existing ones are coming up with new menus. 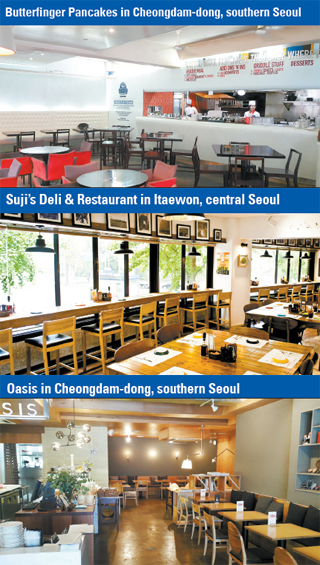 Butterfinger Pancakes is an American-style franchise brunch restaurant in Korea. Since opening in 2006, it has had a steady following. According to Kim Se-hyun, the CEO of Butterfinger Pancakes, although the menu has not changed that much, the range of people who visit the cafe to enjoy brunch has diversified in the last 10 years.

The secret to its long-running success is its unchanging concept of American casual dining, which provides customers with the best U.S. brunch choices. In addition, the restaurant abides by their “three no” rule, meaning it doesn’t add chemical additives, food coloring or reuse leftover food.

Suji’s Deli & Restaurant opened in 2006. The owner, who used to study in New York, first opened the small cafe on the street next to the Hamilton Hotel in Itaewon-dong. It was frequently visited by expats who missed their home country and Koreans who used to study abroad.

With its rising popularity, the cafe eventually moved to its current location in 2008, enlarging the size of the restaurant.

Even though the restaurant relocated, it did not change its rule of making all its ingredients - from bread to ham to pickles - within the store instead of purchasing from outside.

According to the manager, Lee Seung-min, who has been working at the cafe for seven years, even the blueberry sauce is made in store after chefs personally boil the blueberries themselves rather than using a canned product. This is what makes the taste of Suji’s dishes different from other restaurants, Lee says. Due to its popularity, it takes around an hour to be served at the weekend.

Parking: Parking lot at Yongsan District Office is available on weekends for free for two hours.

Restaurant Oasis was opened by sisters Park Ha-huin and Park Sae-huin in May 2009. The cafes and restaurants the siblings visited while they studied in Sydney were the motivation for Oasis, they said. The co-owners majored in design and enjoyed cooking as a hobby before they turned it into a full-time job.

“I want to serve customers high-quality food while providing them with a casual and comfortable atmosphere,” said Park Sae-huin.

Oasis serves a diverse brunch menu, including sandwiches, salads and pancakes. The cafe becomes a restaurant at night, featuring pasta and steak options. In response to the increasing number of people who are interested in staying healthy, the cafe has put special emphasis on salads.

Melting Shop, located on the northern side of Dosan Park in Sinsa-dong, southern Seoul, is highly renowned for its dreamlike interior that reminds customers of fairy tales. 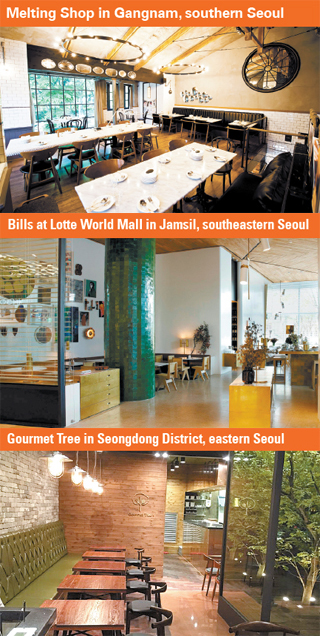 Since opening in December, the restaurant has gained so much popularity that it’s almost impossible to dine there without making a reservation in advance, despite the space being big enough to serve up to 100 people. The tables are completely booked up until July.

With such a following, it is not surprising to see a long line of people waiting to get into the restaurant, even before it opens.

Customers highly praise Melting Shop. According to regular Cho Hye-ryung, a marketer at CJ E&M, Melting Shop has a creative menu that can’t be found elsewhere.

Lotte World Mall houses a variety of restaurants. However, the one that attracts the most customers is most certainly Bills, which opened in October. The brunch eatery, which has various franchises around the world, is an Australian-style restaurant. Chef Bill Granger from down under opened his first restaurant in Sydney in 1993, expanding to London, Tokyo, Honolulu and now Seoul.

“I enjoyed eating at Bills when I was studying in Australia,” said Yang Hye-jung.

“Even though the long wait time is a little inconvenient, I often come to Bills at Lotte World Mall because this is one of the few Australian restaurants I can find in Korea.”

In addition to the great taste of its dishes, the eatery also provides its customers with an environmental-friendly interior design and bright sunlight, which comes through the big windows. Since all the ingredients for the menu are made within the restaurant, many health-conscious customers are attracted to Bills.

Around 500 people come to dine in the eatery at the weekend, so expect a wait time of 30 minutes to one hour. Reservations are taken for tables of three or more after 5 p.m.

Parking: Parking is available by advance reservation only via the Lotte Mall website (www.lwt.co.kr) or by calling (02) 3213-0251-3

Regular customers to the French-style brunch restaurant range from families who come in comfortable clothes to couples who dress up fancy for a date. Gourmet Tree’s executive chef Kim Sung-mo has worked in various French-style cafes and restaurants, including Belle Maison in Bundang, Gyeonggi, and Louis Cinq in Sinsa-dong, southern Seoul.

Kim said his goal is to make French food that can be enjoyed by anyone, which is the reason he chose Seongdong District as the location of his restaurant instead of trendy regions such as Sinsa-dong or Apgujeong-dong.

Even though the restaurant opened in April, it has garnered attention from word-of-mouth through social media. Its dishes have even been highly praised by professional chef Lee Yoo-seok, who said, “The overall menu provided by Gourmet Tree is highly satisfactory, so people will not regret whatever menus they choose to eat.”