Prize winner explains idea of ‘lab on a chip’

Prize winner explains idea of ‘lab on a chip’ 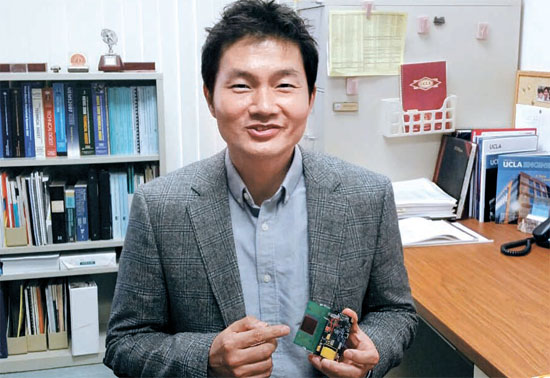 Kim Chang-jin, a mechanical engineering professor at the University of California, Los Angeles, has devoted much of his life to observing and researching the micro-world.

Dr. Kim is a leading researcher in the field of microfluidics, a discipline that encompasses physics, chemistry and nanotechnology to study the manipulation of a tiny volume of liquid, whose concepts can be applied across industries.

This year, he was honored with the Ho-Am prize in engineering for his contributions in this emerging technology. Established by Samsung Group Chairman Lee Kun-hee in 1990, the Ho-Am Prize recognizes the talents of those with Korean heritage who contribute to the development of science, art, medicine and other fields.

“I didn’t even know I was nominated for the prize, but I’m so glad to be honored,” Kim said. “I’m glad my research has been recognized.”

The JoongAng Ilbo recently sat down with Kim to learn more about his research.

Q. What is microfluidics?

A. To put it in more understandable terms, microfluidics concerns ways to manipulate the movement of droplets using an electronic signal. The main point is that valves, pumps and pipes, which are considered essential hardware to move liquid, became unnecessary. Electronic signals can move droplets quite freely.

Do you have any examples for which to better understand it?

Ants trapped in a drop of water can’t get out from it, if you’ve ever watched the movie “Ants” by DreamWorks. It’s just an animation, but it’s based on the fact that an ant is not able to break the surface tension of water. In the micro-world, what you can see through a microscope, the adhesive nature [of liquid] becomes stronger. But electronic signals can efficiently control this adhesive nature and the surface tension of liquid with electric stimulus.

How can it be applied?

A great deal of research has been done on micro total-analysis systems, also known as “lab on a chip.” There is still a need for further study, but with microanalytical tools, the miniaturizing of chemical and biological experiments already became possible, which means a whole laboratory can be reduced to chip size.

Are there any commercialization efforts?

It’s used in the bio sector in various ways. For example, the San Diego, California-based company Illumina developed a DNA analysis tool in February using microfluidics. There is also a mini camera lens that can adjust focus with the help of electric signals. The latest inkjet printer also partly deployed microfluidics.

Did you not major in mechanical engineering?

I studied micromechanical engineering that explores engineering knowledge and products on the micro- and nano-scale.

My Ph.D. study was also focused on manufacturing equipment that can capture a unicellular organism.