Silver stylists are a cut above rest

Silver stylists are a cut above rest 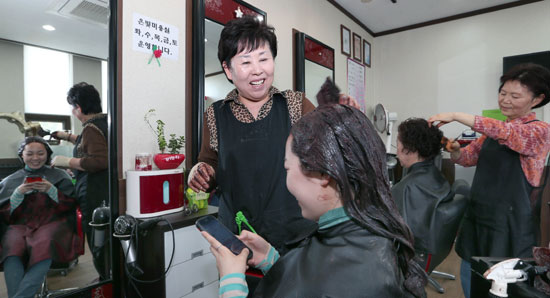 The hairdressers of Silverlight Hair Salon in Gyeyang District, Incheon, are 68.5 years old on average. All nine staff members are over 60 at the shop located on the second floor of the Incheon Gyeyang District Senior Club.

Despite its appearance, the salon enjoys great popularity. Since opening in April 2013, word of mouth reports of the stylists’ skills have traveled through Incheon, even drawing customers from as far away as Bucheon and Gwangmyeong in Gyeonggi.

In their youth, the hairdressers received many compliments on their work. But as they grew older, hairstyles stayed in fashion for shorter amounts of time, and salons had an ever-growing preference for younger stylists.

Then, news spread that the senior club in Gyeyang District was creating jobs for the elderly, and that one of these projects would be a hair salon.

The hairdressers sailed through both the practical test and the interview they were required to undergo in order to wield a pair of scissors once more.

All these services cost half what they do in major hair salons, giving the shop a latecomer advantage and also setting it apart from its competitors.

But the Silverlight Hair Salon is not lacking in quality even with these prices. The shop uses the same chemicals as high-class salons for perms and the latest hair appliances such as infrared machines.

“We’re able to continue offering our services at low prices while using high-quality products because rent is cheap and our equipment was subsidized,” explained salon director Hwang Seon-deok, 65.

To keep on top of the latest trends, the salon also invites hairstylists who have worked abroad to teach the staff new techniques about 10 times a year.

Though the salon regularly draws in older women, recently its clientele has broadened to include older men who were introduced to the shop by their wives, and younger patrons in their 30s and 40s.

One in three customers is now under the age of 40, and the salon has developed a solid customer base.

“Before, when I got my hair dyed at other salons, my scalp always felt like it was burning. That has never happened here,” said Kim Eun-jung, 30, who frequents the salon every three months to get her hair cut and her roots dyed.

“The prices are cheap, too. I’ve become a regular,” she confessed.

Since the hairdressers work in teams of three for eight hours a day, two to three days a week, and take Sundays and Mondays off, they don’t earn as much as other stylists. But they don’t complain, asserting instead that it’s more rewarding to work at the salon without thinking about the money.

“There are times when I feel tired, but whenever a patron says that they are happy with the way their hair turned out, I get excited,” said 73-year-old hairdresser Jeon Jae-ok while smiling.

With the success of the Silverlight Hair Salon, the Incheon Gyeyang Senior Club is pursuing plans to open two more branches.

“Other organizations have visited two to three times a month wanting to use our business as a benchmark,” said Eom Gyeong-a, the director of the Incheon Gyeyang Senior Club.

She confirmed that the club plans to actively expand the salon business.