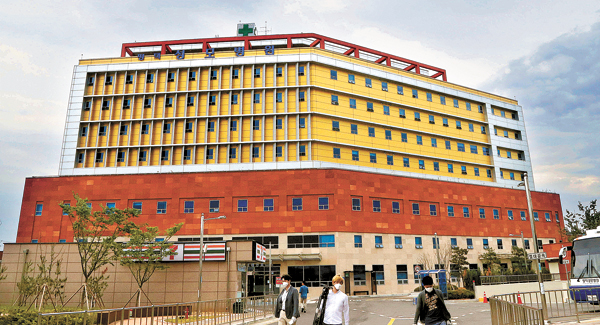 Health Minister Moon Hyung-pyo disclosed Friday Pyeongtaek St. Mary’s Hospital was the epicenter of MERS spread. Moon asked people to call the Gyeonggi Provincial Government’s or Ministry of Health and Welfare’s hot lines if they visited the hospital between May 15 and 29. By Choi Seung-shik

The country’s health authority announced six new cases of Middle East respiratory syndrome (MERS) and a fourth fatality, and disclosed the name of the hospital in which the first MERS patient transmitted the disease to most other sufferers.

The government has maintained a position not to make public the names of hospitals at which MERS patients are treated, claiming it would only fuel panic. It made its first such announcement Friday.

“My fellow citizens, especially people living in Pyeongtaek and Gyeonggi, please call the Gyeonggi Provincial Government’s or Ministry of Health and Welfare’s hot lines if you visited Pyeongtaek St. Mary’s Hospital between May 15 and 29,” said Health Minister Moon Hyung-pyo on Friday. “That is specifically when the virus was transmissible [within the hospital].”

May 15 is the day Patient No. 1, who brought the disease from the Middle East after a 16-day business trip, began being treated at the hospital. The authorities completely shut the hospital on May 29.

The health authority wants to find people who may be infected and need to be quarantined.

In all, 30 of Korea’s 42 MERS patients were infected in Pyeongtaek St. Mary’s Hospital, either by Patient No. 1 or a second-generation patient.

“The virus is still being detected even after shutting down [the ward] for 10 days and sterilization, and we are worrying about patients who had either direct or indirect contact with MERS patients,” Moon added. “[Pyeongtaek St. Mary’s Hospital] is the only medical facility that had a massive number of transmissions and we will disclose names of other hospitals if the same pattern is found in them.”

On Friday, the Health Ministry announced six more patients, raising the total to 42. It also announced the death of Patient No. 3, who contracted the disease directly from Patient No. 1 while sharing a room with him at Pyeongtaek St. Mary Hospital from May 15 to 17.

The ministry said Patient No. 3, 76, had serious cholangioma, asthma and chronic obstructive pulmonary disease and died on Thursday. His daughter, who took care of her father in the hospital room, is Patient No. 4. His son, who also visited that hospital room, made headlines for travelling to Hong Kong and southern China, where he was confirmed to have contracted the disease on May 29, becoming Patient No. 10.

They are the first third-generation patients from that hospital.

Patient No. 1, who tested positive for MERS on May 20, stayed at the hospital from May 15 to 17. The two third-generation patients, Patients No. 39 and 40, stayed there after Patient No. 1 was transferred to another hospital.

Another patient confirmed on Friday is a chief master sergeant of the Korean Air Force at Osan Air Base, who contracted MERS at the same hospital in Pyeongtaek while he was treated for an Achilles tendon injury from May 14 to 27.

The sergeant, Patient No. 37, was treated on the floor below the other MERS patients so how he was infected is a mystery.

The MERS countermeasure headquarters under the Health Ministry has consistently denied that the disease can be transmitted through the air and must come from close contact with a patient and his or her bodily fluids, including saliva and vomit.

But the RNA of the MERS coronavirus was found in an air conditioner filter at Pyeongtaek St. Mary’s Hospital.

The countermeasure headquarters still downplays the possibility of airborne infection.

“The air conditioner was close enough to the patient and [droplets from] coughs or sneezes could have reached the filter,” Kwon Jun-wuk, an official at the headquarters, said on Friday. “It’s too early to say that there have been airborne infections because of virus found on a filter.”

A thesis by a team of scientists at King Abdulaziz University in Jeddah, Saudi Arabia, which was also run in the American Society for Microbiology’s journal mBio, also suggested the possibility of airborne infection.

“For their research, Esam Azhar and his team collected three air samples on three consecutive days from a camel barn near Jeddah owned by a 43-year-old male MERS patient who later died from the disease,” the thesis read. “An air sample collected on the same day as the first camel tested positive for the disease also contained MERS DNA, which were later discovered to be identical to fragments detected in the camel and its sick owner.”

The Ministry of National Defense is also struggling to prevent any spread of the disease among soldiers.

The defense ministry decided to collect samples from six soldiers who visited Patient No. 37 at the hospital and send them for examination. It also isolated a female petty officer in the Korean Navy who visited her grandfather, who was confirmed to have MERS on May 29. A total of nine soldiers are being restricted at military hospitals for close contact with MERS patients as of Friday.

“We are putting our every effort into preventing MERS in the military,” said a Defense Ministry official on Friday. “We are planning on separating soldiers who show any kind of symptoms of MERS or suspected patients in early stages to completely block MERS spreading within the military forces.”

Prisons and detention centers, where people are concentrated, are also taking special care.

Detention authorities said on Friday they have isolated a guard and a prisoner in the Chungcheong area after they were found to have visited a hospital in Daejeon where four patients were found positive for MERS.

“They did not exhibit any symptoms and the separation is only a precaution,” said an official of the local correction authority. “We need stricter measures because prisoners live in a communal environment.”