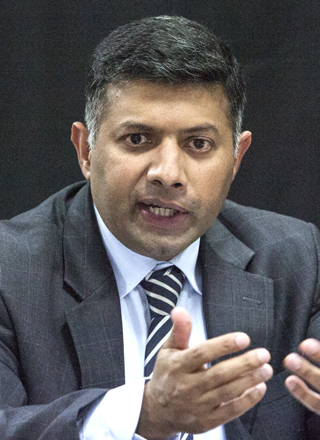 In celebration of the first International Day of Yoga, which falls on June 21, Indian Ambassador to Korea Vikram Doraiswami said Friday at the Indian Cultural Center that a range of yoga festivities are scheduled nationwide.

Doraiswami was accompanied by a group of representatives from local yoga organizations, the hosts of those events, and detailed each gathering during a briefing previewing the commemorative day.

Five events will kick off on June 21 in Seoul, while Busan and Daegu plan to host one each.

The International Day of Yoga was declared by the United Nations General Assembly on Dec. 11, 2014, after a call for its adoption by Indian Prime Minister Narendra Modi during an address to the assembly earlier that year.

Modi said June 21, the summer solstice and the longest day of the year, holds significance in yogic tradition because the first disciples of the original yogis dispersed to introduce the discipline to the rest of the world.

The Indian Embassy in Seoul will support local yoga organizations to run sessions for the public that day. The events are as follows:

At Seoul City Square in Jung District, central Seoul, the National Yoga Association of Sports for All will host the Let’s Yoga Together Event from 10 a.m. to 1 p.m., during which participants will be guided through a yoga session and relevant art performances. Anyone may join, and nearly 2,000 yogis are expected to attend.

On the third floor of the Woosong Building in Gangnam District, southern Seoul, from 10:30 to 11:30 a.m., a breathing exercise and meditation period will be available to the public. For more information about the event, hosted by Art of Living, Korea, visit www.artofliving.or.kr.

The Aimyoga Research and Education Institute will hold a yoga workshop at the Indian Cultural Center from 11 a.m. to 1 p.m. For more information about the class, which will cover the origins of yoga and how it can be incorporated in one’s everyday life, visit www.aimyoga.in.

At the Green Yoga Concert, held from 2:30 to 4:30 p.m. on the Floating Stage in Yeouido, southwestern Seoul, yoga sessions and musical performances will be available to the general public.

For more information about this event, hosted by the Korea Yoga Alliance, visit www.yogyaan.com.

In Busan, the Indian Cultural Center Busan will run an hour-long yoga class for the public at Busan Citizens Park from 5 p.m. For more information, visit www.iccbs.or.kr.

A similar class will open at the Road Art outdoor stage in Daegu from 4 to 6 p.m. Participation is 10,000 won with spots reserved on a first-come, first-served basis. For more information, visit www.iyengar.co.kr.