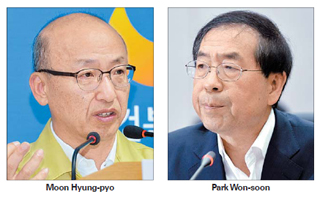 Seoul Mayor Park Won-soon’s bombshell press briefing Thursday night has sparked a controversy over whether the mayor crossed a line in announcing that a doctor at a well-known Seoul hospital came into contact with over 1,500 people at an event last Saturday even though he had symptoms of Middle East respiratory syndrome (MERS).

Park’s announcement about Patient No. 35, who tested positive for the virus on Thursday, was followed by stinging criticism of the central government’s handling of the outbreak. Park is considered a potential presidential candidate in 2018 for the opposition New Politics Alliance for Democracy (NPAD).

During a hurriedly arranged press briefing at 10:30 p.m. Thursday, a grim-faced Park said the 38-year-old doctor who contracted the viral disease from Patient No. 14 at his hospital attended a residents meeting for an apartment redevelopment in Gaepo-dong, southern Seoul, May 30 attended by 1,565 people.

He already had symptoms of MERS three days after he came into contact with Patient No. 14 at a Seoul hospital on May 27.

“The city government has learned that a doctor had gone to a meeting of over 1,500 citizens even when he displayed symptoms of MERS,” blasted the mayor. He slammed the central government for not sharing information about the doctor patient.

“After we learned of Patient No. 35’s visit to a large public meeting, we began searching for clues [as to whom he may have met and where he might have gone afterward]. But we did not receive any relevant information from the Health and Welfare Ministry or the Korea Centers for Disease Control and Prevention (CDC).”

In a direct jab at the government, which is under increasing fire for its response to an outbreak that has infected over 40 in a two-week period, the second-term city chief said, “We decided to warn those who attended the meeting to voluntarily quarantine themselves at home after obtaining a list of attendees,” said Park. He stressed that the city government was contacting each of the 1,565 participants.

“We have concluded that we will not be able to protect Seoul’s citizens with the government’s response and monitoring of the unfolding situation.”

Park’s declaration that he would take the lead in countering the disease’s spread in the capital city has sent ripples through the political establishment.

Hours after Park’s press conference, Health Minister Moon Hyung-pyo held his own to flatly reject Park’s announcement, expressing “deep regret” that the Seoul government had “sparked concerns and misunderstanding” based on false information.

“[Park’s] claim that the ministry did not share information regarding Patient No. 35’s activities prior to June 4 is not true,” said the minister Friday. “The Health Ministry swiftly conducted an epidemiological investigation and shared the results of it with relevant bodies such as the CDC and an investigation team from the Seoul government via social networking sites and so on.”

Moon went on to say the ministry had already started tracing the 1,565 people at the Saturday event to take necessary preventive measures and had considered using force to obtain a list of attendees from the apartment redevelopment meeting.

The doctor himself also disputed Park’s remarks at the press conference and said in a phone interview that he did not have symptoms last Saturday when he went to the meeting.

“The Seoul city government said I displayed a sign of MERS infection starting from May 29 and went to the meeting despite the symptoms, but all of these claims are not true,” said the doctor, who is now in quarantine at a state-designated medical facility in Seoul. He said he displayed MERS symptoms starting on Sunday, May 31, a day after the meeting, and had voluntarily stayed in his home that day. Patient No. 35 expressed outrage at Mayor Park for having characterized him as a doctor who would go to such a public event even though he was aware of the risk that he was infectious.

In response to those rebuttals, the Seoul city government said Friday that the important issue was not whether the patient was aware of his infection on May 29 and 30, but whether he had contact with people when he had symptoms of an infection.

Reaction to the mayor’s intervention is mixed. While some applaud Park’s active response to the situation as the government seems to flounder, criticism has also arisen that he has aggravated public anxiety over the outbreak. Some have also questioned whether he is trying to spin the situation to his political advantage to improve his chance at a bid for the Blue House in 2018.

The ministry’s response to the Seoul city government laid bare the poor level of cooperation and trust between the two entities in the midst of a public health crisis.

The ruling Saenuri Party went on the offensive against the human rights lawyer-turned-politician, saying Park had spread false information and aggravated public worries.

“We must find out if there was any motive behind Mayor Park’s press briefing Thursday and hold him accountable if there was,” said Saenuri Rep. Shin Yee-jin, a pediatric psychiatrist-turned-lawmaker.

The opposition NPAD went on the defense for Park. Party Chairman Moon said Friday, “President Park Geun-hye should be at the forefront in efforts to prevent any further spread as exemplified by Mayor Park, for the safety of Seoul citizens.”

Following Park’s active posture, South Chungcheong Gov. Ahn Hee-jung said Friday that his provincial government would take the lead in efforts to stop the contagion. Seongnam Mayor Lee Jae-myung made public the number of people suspected to have contracted the virus and those who tested positive in the city.

Lee disclosed that the city has two confirmed patients at a military hospital, which contrasted with the government’s stance on not revealing the names of hospitals except for Pyeongtaek St. Mary’s Hospital, south of Seoul, source of the majority of infection cases where 30 people contracted MERS.