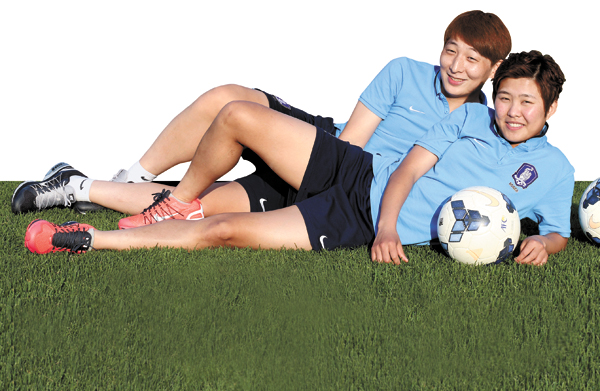 It is the first time they have participated in the quadrennial event since 2003.

With coach Yoon Duk-yeo leading the squad, fans have their eyes on two forwards that play overseas: Ji So-yun of Chelsea Ladies FC in England and Park Eun-sun of Rossiyanka in Russia.

Ji, 24, previously led Korea to third place in the FIFA U-20 Women’s World Cup in 2010, but this is her first World Cup at the senior level. On the other hand, Park, 28, is one of two players in the squad who participated in the 2003 World Cup, along with goalkeeper Kim Jung-mi.

Ji and Park have already received international attention. In April, Ji won the Professional Footballers Association Women’s Player of the Year award in England, while Park was the focus of a story on FIFA’s website May 30.

“Powerfully built and with an impressive goalscoring ratio, Park is very much the team’s focal point,” the story said.

Both players aim to help get Korea’s first victory in the World Cup and make it to the Round of 16. In Group E, Korea, ranked 18th in the world, faces No.7 Brazil on Wednesday (Korean time), before meeting No. 37 Costa Rica on June 14 and No. 14 Spain on June 18.

In an interview with the JoongAng Ilbo, an affiliate of the Korea JoongAng Daily, before two players departed the country, Ji and Park said that they want to perform well in the World Cup and hope they’ll receive the same level of attention as the men’s national team.

Q. How do you feel about playing in the World Cup?

A. Ji: I realized that there is also World Cup in women’s football after I saw Korea participating the 2003 FIFA Women’s World Cup in the United States. How was your World Cup experience there, Eun-sun?

Park: Because it was our first appearance, we were nervous. I remember we couldn’t hear our voices because of noise from the crowd, and so we were also frustrated. But it was the time that we gained attention from people. In the final group match against Norway, Kim Jin-hee scored Korea’s first goal in the World Cup, but we couldn’t even smile because we lost 1-7.

Both of you play in overseas. Does that give you an advantage?

Ji: I moved to England because of the World Cup. I wanted to face European players before I met them in the World Cup. But since they have good physiques, I learned it wouldn’t be easy for me. I realized you need to play smart by having quick penetration and passes to avoid defender’s man-marking. You also need some plays that can shake defenders’ mentally. But since physical contact is inevitable, I did weight training to build muscle.

Park: I also went to Russia thinking that I would also experience an advantage in the World Cup. I’m a woman who wears short sleeves even in the winter, but the coldness in Russia was unbearable. There was even a day when clear weather just turned into rain and then began to snow. Since I play in a cold place, injuries also happen a lot. Last month, I hurt my ankle, but fortunately it’s gotten better. Although it’s difficult, I don’t regret it. I have good physique, but European players’ are powerful and tough. Instead of facing them one-on-one, I learned I should use my teammates and pass the ball.

What’s your goal for this World Cup?

Ji: First I want to see us advancing to the Round of 16, and then the quarter finals, semifinals … and then the championship. Japan already did it [in 2011], so why can’t we? I think one win, one draw and one loss in the group is enough for the Round of 16. First, we should play well against our first opponent, Brazil. I want to meet Brazil’s five-straight FIFA Women Player of the Year winner Marta. I want to show her that in Korea, there’s Ji So-yun.

Park: I haven’t watched her performances closely. I just want to focus on my games.

Ji: That’s right. I think you are faster and better than Marta. I really want you to score a goal in this World Cup and lead the revival of Korean women’s football.

What do you expect from this World Cup?

Park: It will be really good if we can get people’s attention. If we show good performance, I believe people will pay more attention to women’s football.

Ji: Can we also get big welcome like men’s team if we make it to the Round of 16? I want to show people that there is not just men’s football in Korea, but also women’s.

Park: If we don’t get nervous and do what we’ve done in training, we can go to the Round of 16, so Ji, let’s not give up. Some people say that getting a draw with Brazil seems to be best result, but no player plays a game to get a draw. I think if we advance to the Round of 16, there will be parade in the streets. But for me, I want to see K-pop groups performing to congratulate us on our win.